If I were to title this review, I would call it “Camping Tent Meets Smooth Jazz.” Or “Leave the Candles At Home, Camping Just Got a Lot Sexier.” I’ll stop there. My point is that the LED feature that Big Agnes stitched into the roof of the Tiger Wall UL2 mtnGLO Tent is to camping what the lava lamp was to the VW Camper Van: mood, atmosphere, and a stab at improving upon an already perfect experience. 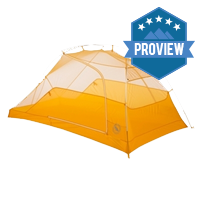 Product Description: The Tiger Wall UL tents are our lightest two door/two vestibule, technical backcountry shelters yet. The two doors make tent life a little easier, and the weight savings is especially nice when out for multi-day trip and gram counting. Combining simple, yet strong single pole architecture with DAC Featherlite materials, interior storage pockets, and comforts around every corner, these tents are poised to be a backcountry favorite. 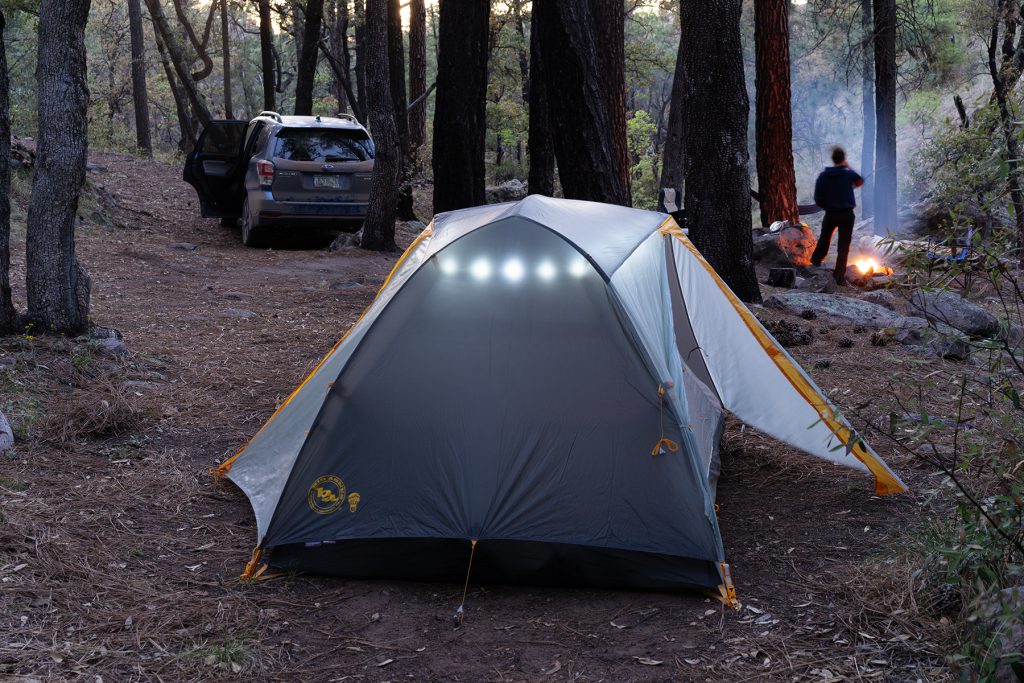 I’d like to think of my time in the outdoors as being removed from modern amenities, luxuries, and other distractions. And in general, I get somewhat upset when a comrade or partner pulls out their cellphone and starts listening to a podcast—or Sade (a singer from the 80s)—while sitting at the bottom of the most remote place I can imagine being. But having acknowledged that I like good gear, and that I’m not traipsing through fern-lined canyons with grape leaves around my privates, this little mtnGLO string of lights has made it to my exception list of outdoor amenities. And if the batteries should ever run out while in the backcountry, I’ll be none the happier for having carried in that extra four oz’s (the weight of the light system plus three AAA batteries) because the tent is very good and darn light (pun intended) too. 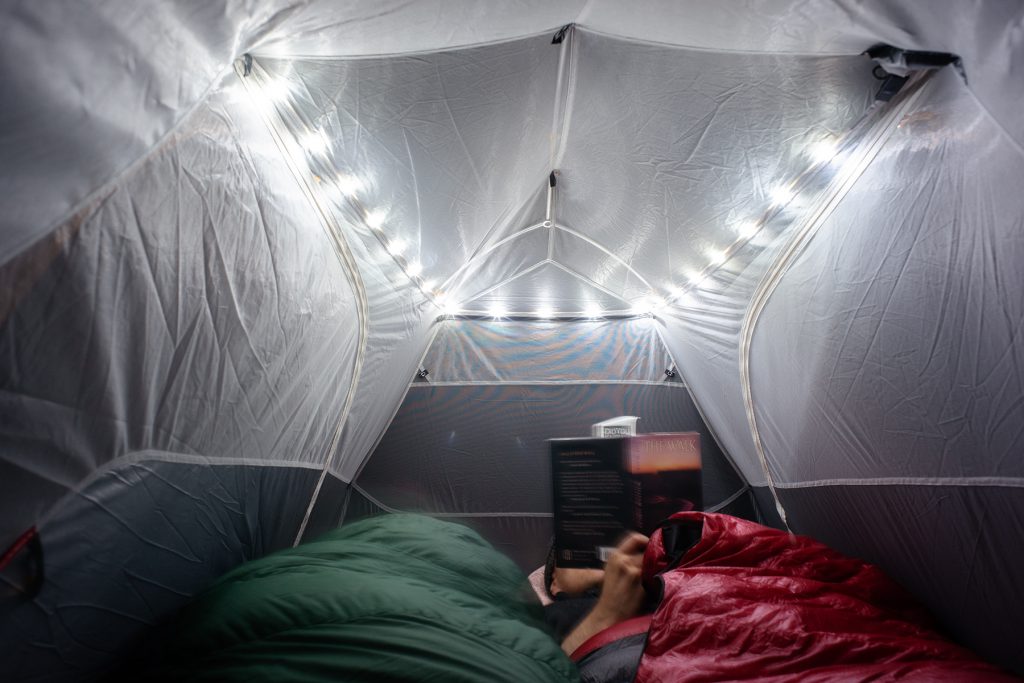 Back to Sade—or Leon Bridges for the younger folks out there. The first time my partner and I flicked the switch (pushed the button) on the LED’s, something special happened in that tent. As a photographer of 25 years, I am well-attuned to how light can affect mood. And in this case, the glow was magical, if not steamy. But if you are older than 35, and didn’t eat your carrots growing up, you’ll still need your headlamp to read. The lights at their maximum brightness weren’t strong enough for me to comfortably read bedtime stories. 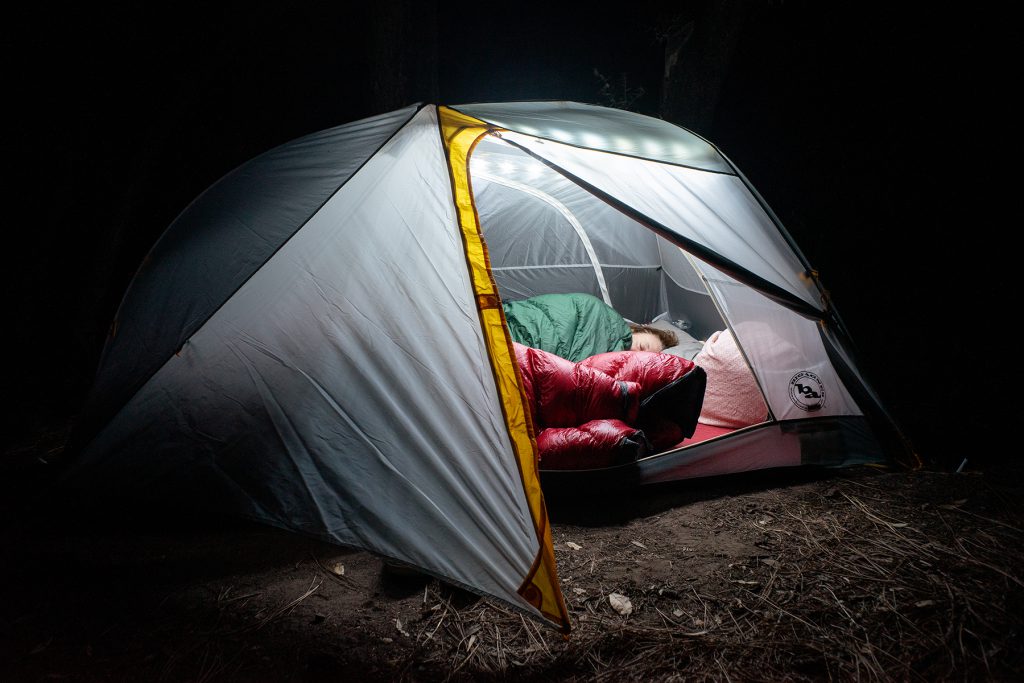 Clocking in at ~3lbs 2oz. (that’s including three AAA batteries and the footprint) the tent still weighed less than my solo rig. It’s only a tad smaller than the other two-person tent I have used for almost seven years. My point is that you get a lot of space for so little weight.

Of course, ultralight materials at this juncture in time often come with trade-offs. For one, the six-ounce footprint which retails for $70 is an absolute must. The floor material (which seemed similar to the fly material) didn’t look like it wanted to be poked too hard. On a few occasions, some small pebbles underneath the tent left the grey fabric with that smoky-white stretched look that an eraser gets right before it’s about to tear. Also, there are a couple of plastic parts on the tent that caused me a wee bit of concern. For one, the horizontal crossbar at the top of the tent is attached to the tent body by a plastic grommet on either end. Parts like these could get quite brittle and perhaps crack after enough snapping on and off. I personally prefer the security of metal grommets. 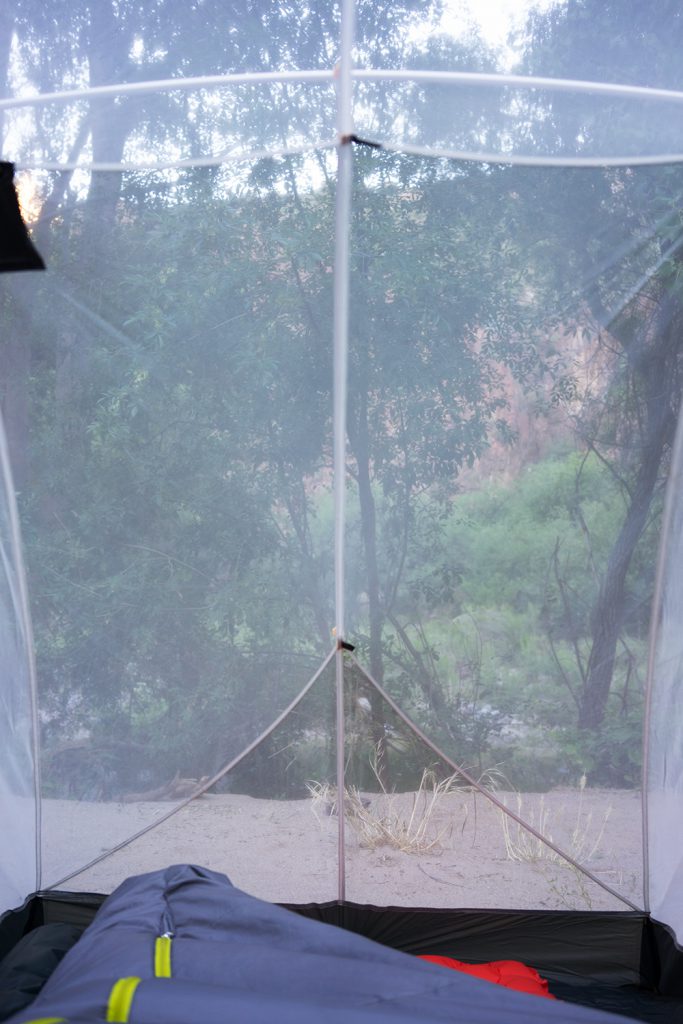 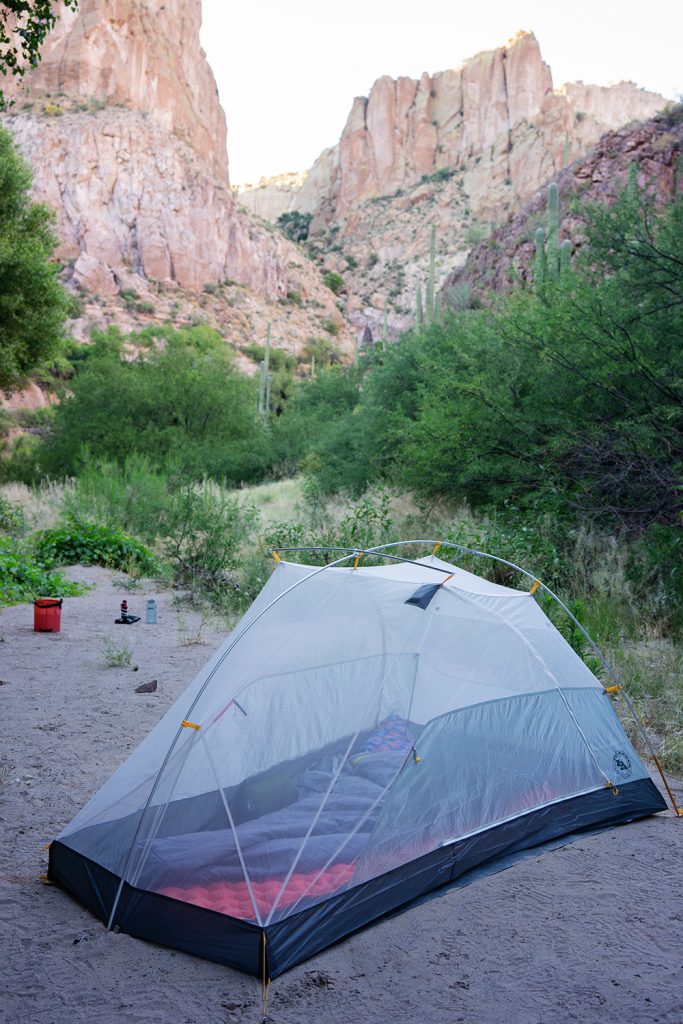 But don’t let these concerns bake-in too far. While in a canyon for a three-day solo, the winds were high into the thirties with even stronger gusts. I had the tent fully guyed-out and it felt and looked very stable. Nothing suffered from many hours of unrelenting abuse.

While it did rain one evening, it wasn’t enough to tell whether the relatively large gap between the edge of the fly and the ground was going to be a significant problem for splash back; given the high bathtub floors though (see comments below), my guess is that it wouldn’t be much of an issue.

A desert/warm-climate friendly feature of the Tiger-Wall is the white mosquito-net mesh that is used on the vast majority of the tent. As I lay down on a 60-degree evening at the bottom of a high-walled canyon, the ceiling vista had me floating amidst the canopy of trees silhouetted against the stars and planets above. The frogs, crickets and great horned owls formed the soundtrack to this moment. All to be crashed by the snoring of my buddy in his vastly inferior and heavier tent nearby. 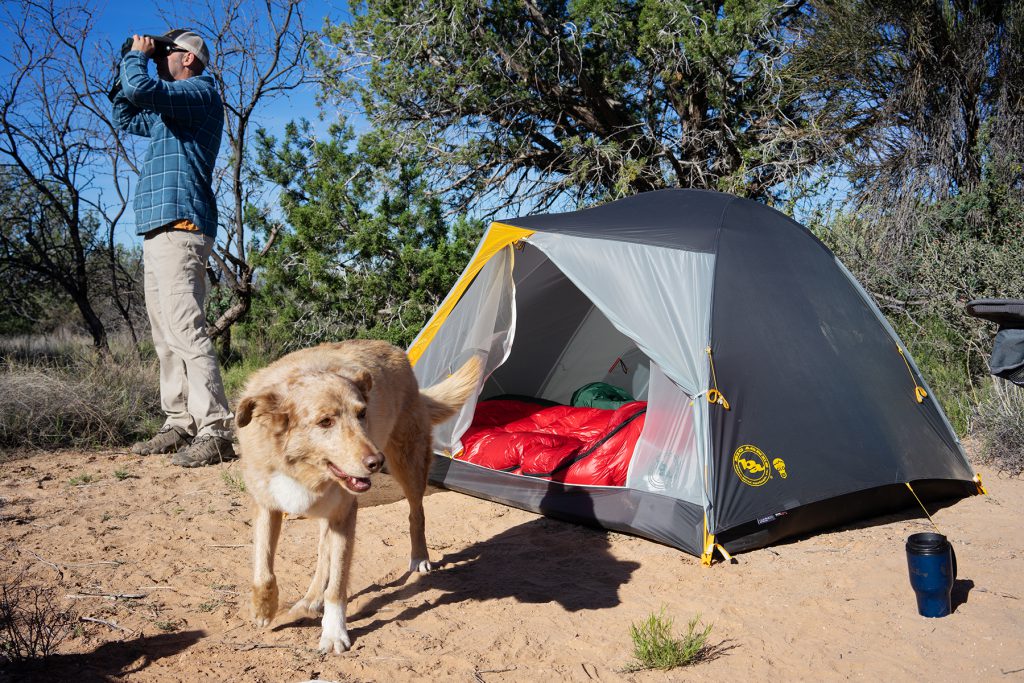 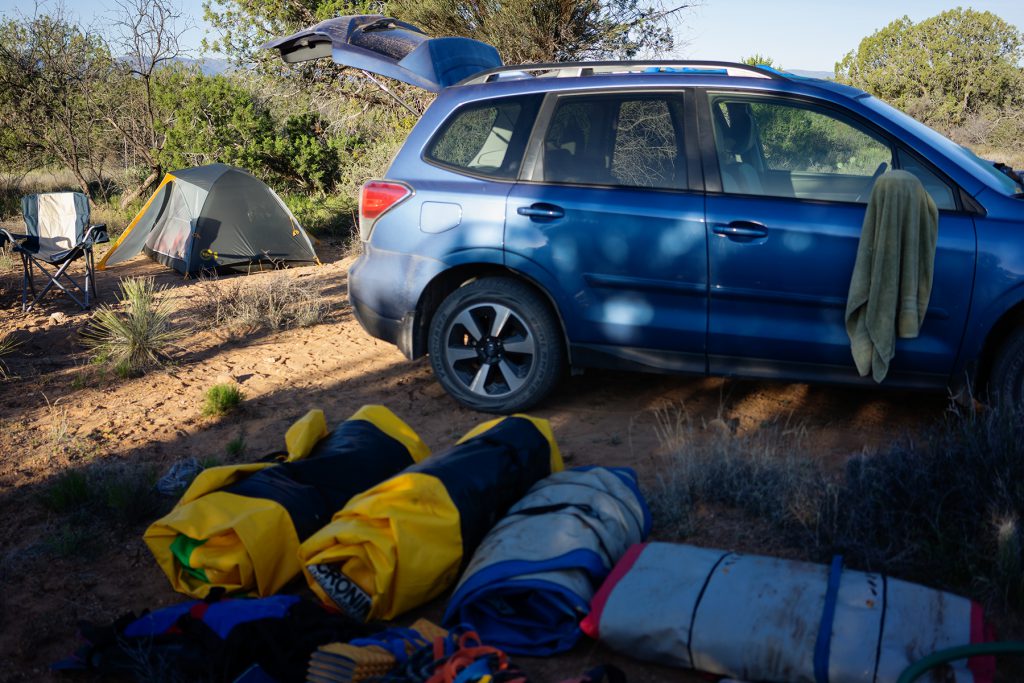 The fact that the mesh is white–versus the black mesh on my last three tents–at the very least gives me the internal sense that it is reflecting the sun in the morning rather than absorbing the heat. Whether there is any science to back up this claim is another matter. But if you care about aesthetics, the white mesh can get dirty very fast.

I want to step back for a second and examine the logic of sleeping in a tent. In its most stripped-down form, a tent can be viewed as A. a physical barrier between an inhabitant and the “natural elements,” or B. a psychological security wall between a human and a perceived threat. The former being snow, rain, and bugs (bugs are not a “natural element,” but for the purposes of my example, close enough). The latter being mountain lion or bear with very dull claws–if they have sharp claws, they could easily tear their way into your tent. In my case, the biggest concern is dirt. Which would fall into category A: the “natural elements.” For this issue, not all shelters are made alike. The Tiger Wall tent has generous bathtub floors which keep the bottom of the vestibule zipper ~5 inches off the ground. Bathtub floors, of course, serve many purposes. Other than monsoon season in the desert, I don’t worry much about rain climbing into my tent. But the greatest relief I have experienced from the high walls of the bathtub floors is that I am not dragging hectares of desert dirt into the tent and inside my sleeping bag. And when I am shaking tarantulas, scorpions, and other friendlies out of my boots to answer nature’s call at two am in the morning, none of those venomous creatures are bouncing off the ground and back into the tent. This has been a pet-peeve of mine that I can virtually kiss goodbye now. 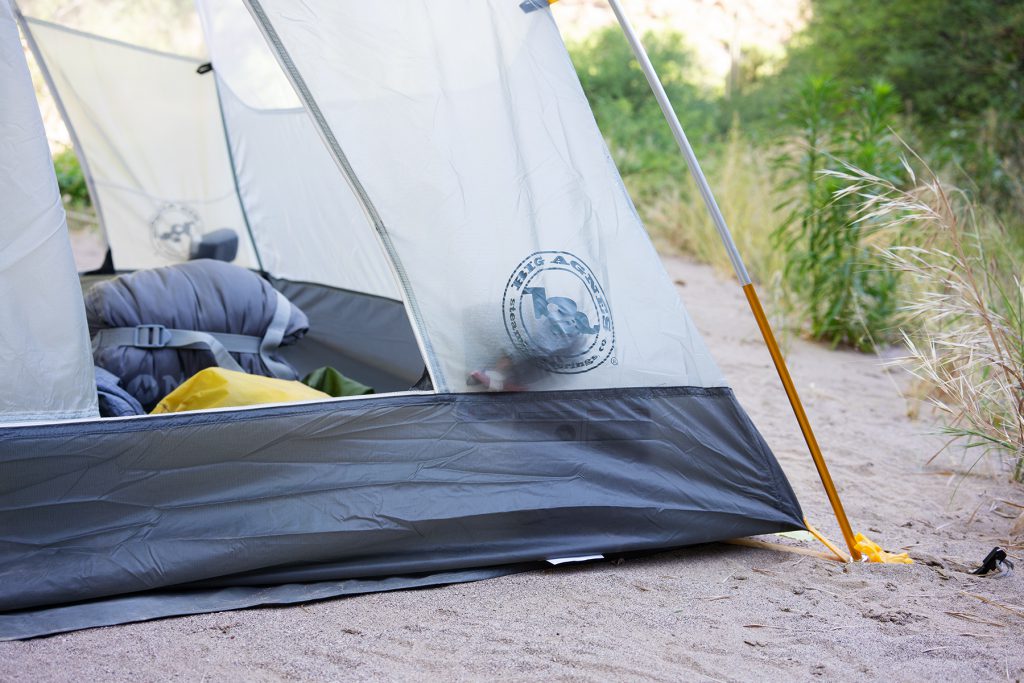 One annoyance that became more significant after about my sixth day of using the tent was the door situation as it relates to the rain fly. I haven’t quite pinpointed the problem, but something about the design was causing the fly to get caught in the tent zipper. Also, when the fly door is fully rolled up, I noticed that it still didn’t create an efficient and wide opening to move through. It definitely isn’t a show-stopper. But I noticed it.

In all honesty, no matter what I will always have my headlamp with me. But for me, turning up the steamy romantic mtnGlo feel is worth a few extra ounces. Some ultralighters are going to be rolling over in their sleeping bags thinking about the extra four oz.’s that have been permanently stitched into this tent. In which case, they can get the exact same shelter without this hot feature. 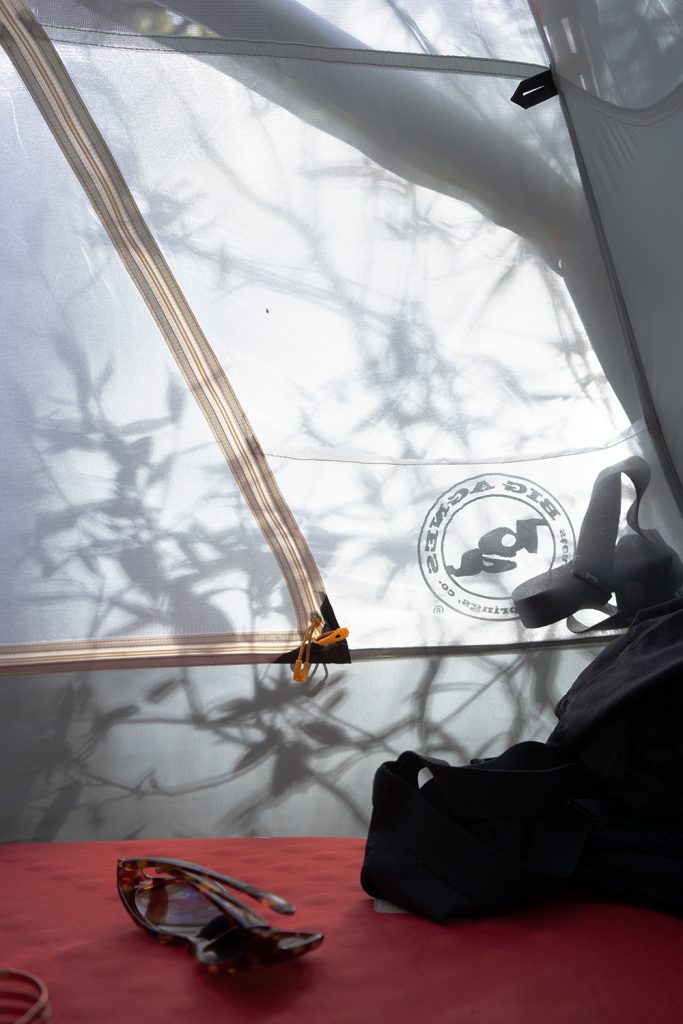 I used the tent throughout the state of Arizona: in the Chiricahua Mountains, the Coconino Forest outside of Camp Verde, down in a canyon up on the Mogollon Rim, and deep in a canyon in the Galiuro Wilderness. 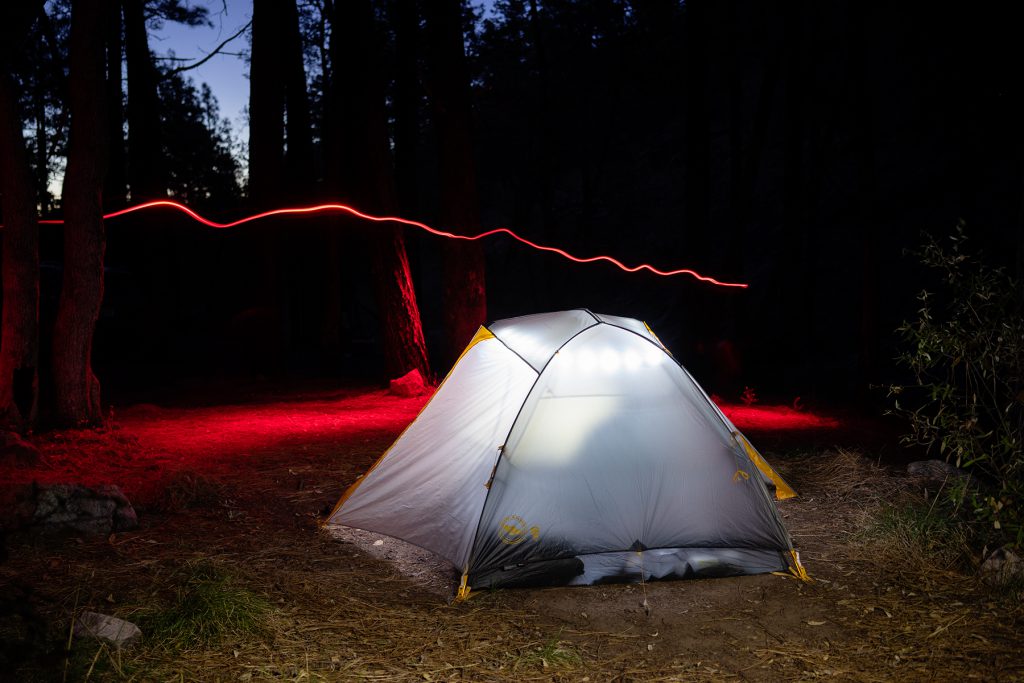 Serge J-F. Levy is an award-winning photographer and writer whose work has been exhibited internationally. Though he grew up in New York City and worked there as a professional magazine photographer (ESPN The Magazine, New York Times Magazine, and others), he currently calls the Sonoran Desert his home. He is a professor of photography and is working throughout the Southwest on book projects and exhibitions that relate to the outdoors as a metaphor for the human emotional landscape—and other light topics. You can view some of his work online at www.sergelevy.com or IG: @outdoorframes.