This is not something you want to hear through the howling wind and piercing darkness of someone on your team plummeting through the trap door of a crevasse. Although it is fairly rare to have a completely free hanging crevasse fall, it can most definitely happen. If it does, are you prepared to haul your teammate out? Or if it’s you who is dangling in the dark abyss, are you prepared to ascend the rope and self-rescue if your partners are unable to perform a crevasse rescue? 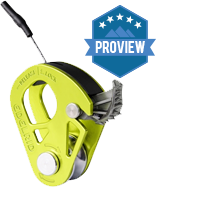 So far, the Spoc has performed flawlessly while instructing, demonstrating, and practicing crevasse rescue hauling systems over the last couple of months here in the Cascades. The longevity of this device remains to be seen, but I believe it will withstand the rigors of the mountains.

I have taught both of these complex skills over the last few years to dozens of eager climbers ready to become masters in the dark art of crevasse rescue. As it turns out, luckily, most climbers won’t ever have to actually use their skills in crevasse rescue, but if they do, they better have the knowledge and the tools to do it most efficiently!

As a guide who spends vast amounts of time in glaciated terrain, I have always carried a Petzl Micro Traxion as it was simply the best tool for the job as I progress in my crevasse rescue system. I was stoked to hear that there was finally a competitor to the market that could give the Micro Trax a run for its money! Enter, the Edelrid Spoc.

This thing is slick! It follows the Edelrid color scheme with a bright green anodized finish and just looks like its sleeker and more refined than its long time trusted competitor from Petzl. Or maybe it’s just a refreshing take on a proven system. From the moment I saw this little widget, I wanted one!

The Edelrid Spoc is the German company’s answer to the ever popular Petzl Micro Traxion. It is 25 grams lighter, accepts smaller rope diameters, and is $30 cheaper than its competitor.

The big claim to fame and what I heard about the most was the ultra-light-weight of this newcomer. Weighing in at a mere 60 grams, I was wowed at how much lighter it was than the Micro Trax everyone knows and loves. Twenty-five grams (4 oz) lighter, able to accept ropes from 7mm- 11mm, and retailing for under $100. What’s not to love? All that and my favorite feature hasn’t even been discussed yet!!

The lightness is nice, but when putting together all the weight of my guide gear, 4 oz of weight savings suddenly didn’t seem that significant. The feature that convinced me that this little gadget was worthwhile was actually the hole that the carabiner clips to. This hole is larger than the Micro Trax and allows a full-sized carabiner to fully rotate past the gate! Such a small detail, but very useful when needed!

My one gripe with the features is the pull cord for the caming device. Attempting to use the pull cord with large gloves or mitts on could prove more difficult than using without gloves or using dexterous gloves

After six weeks of using this device, amazingly, the Spoc shows no signs of wear and tear. The integrated spring to the camming device is strong and should work well with repeated use. My concern is that mud or dirt will get into the exposed springs and diminish its efficiency.

This little piece of engineering mostly sits on my harness in case of an emergency. In doing so it collects moisture and dirt from precipitation and from being on glaciers and in the alpine. So far, the Spoc has performed flawlessly while instructing, demonstrating, and practicing crevasse rescue hauling systems over the last couple of months here in the Cascades. The longevity of this device remains to be seen, but I believe it will withstand the rigors of the mountains.

Seth White is an Instructor and Guide with the American Alpine Institute and has explored, climbed, and guided in mountains all across the globe from Chilean Patagonia to the roof of North America to Spain's limestone meccas. He has worked as a professional guide for six years. Growing up in the Pacific Northwest he now calls Seattle, Washington home, and spends his days off adventuring with his partner Carissa and their dog Arrow, drinking copious amounts of coffee, and searching for that next perfect piece of gear.

How to Get Outdoors Responsibly