The EXPED Thunder 70L men’s pack performed well at carrying heavy loads with many features allowing for ease of packing. This pack was a work horse carrying climbing, mountaineering, and backpacking gear during the testing.  The Thunder 70 would make for a great long range backpacking pack or for lugging gear on a mountaineering expedition. 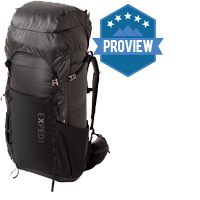 Product Description: The durable, full-featured, multi-day Thunder offers convenient dual access set on an ultralight suspension system. It combines top-loading simplicity with the organizational ease of a panel loader. And while Thunder's low total weight makes it an ultralight, it's load-bearing capacity remains high. Main compartment access is unsurpassed with both top and panel loading options. As a top-loader, Thunder is opened through the double-drawcorded and skirted top under a fully extendable and removable floating lid. In this mode, the pack expands upward to accommodate bulky, oversized loads.

The EXPED Thunder 70 is a very capable and comfortable pack for carrying heavy loads on extended trips.  I personally loved the front opening feature allowing for quick access to any part of your pack which has been lacking in packs I have used in the past. If I go back and do the Colorado Trail again or take on a thru-hike like the CDT I will seriously consider the Thunder 70 for its rugged durability and versatile features.

The Thunder 70 held up great to everything I threw at it (or in it). Although I did not get caught out in a torrential downpour with the pack, it is made of 210 D HMPE ripstop nylon with a water-resistant treatment to keep your gear dry. The ripstop nylon is very abrasion resistant which deflects attempts by trees and rocks to tear up your pack. The pack sports a very comfortable hip pad that does “break-in” the more you use it as EXPED explains in their product video.  I found the shoulder straps to be a little thin and the adjuster for the T-Rex suspension system to be a little cumbersome, but I will address that below.  The Thunder 70 definitely performed well as a gear hauler when I took it climbing as well as backpacking.

This pack adheres to the “traditional” model of internal framed packs with one large main compartment and a top lid, but with its own sleek design features.  The massive top-loading main pocket can be accessed from the top or through the front.  A large top lid with easy adjustments to compensate for overpacking the main compartment sits above and three stretch pockets in total adorn the front and sides. The pack comes in a few different colors which I recommend getting a vibrant color personally. I tested the jet black pack and although not critical, when I loaded the pack indoors the pack was so dark I had to wear a headlamp to see down inside.  Only slightly annoying, but I definitely wanted to mention it.

This pack is loaded with features! EXPED added velcro straps to all of their webbing compression straps which allows you to velcro the excess webbing rather than have all the compression straps blowing in the wind.  Daisy chains run up both sides of the packs front allowing for a multitude of gear to be attached to the pack.  Zippers are concealed beneath each daisy chain running up the pack allowing for the main compartment of the pack to be accessed by opening the front panel of the pack completely. The compression straps along the side of the pack can run inside or outside of the water bottle stretch pockets in case you rather strap something like skis or snowshoes on the outside.  A large stretch pocket sits in the front of the pack and is large enough to keep anything readily available such as rain gear, gloves, or your climbing helmet. However, the big feature on the Thunder 70 is the T-Rex suspension system. EXPED equipped this pack with its proprietary adjustment system which allows users to adjust their packs to fit them precisely.  The T-Rex suspension system is supported by a single aluminum bar running up the center of the pack and is adjusted by removing the padding behind the small of your back thus allowing the shoulder straps to slid up and down the bar.

Coming in at 57.5 oz total (3.6 lbs) this pack is very light for a 70-liter workhorse.  With a load limit of 52.9 lbs, the Thunder 70 is definitely a heavyweight load carrier in a featherweight package.  The pack itself is very easy to pack.  The main compartment can be accessed through the top or front as I stated previously, but the top is fitted with two synch cords that allow you to really tighten down a fully loaded pack. There is also a compression strap running across the top of the opening. This can be used for tying down a rope or jacket above the main pocket for example or just synching up the weight of the upper pack towards your shoulders to help distribute weight evenly.  At 70 liters of capacity, the Thunder 70 absolutely devours gear like a black hole.  I frequently used the pack to carry as much climbing gear as I could stuff in it for testing. Just for an idea of what I stuffed in the pack at one time, I will list them.  I managed to stuff a full medkit, wag bag, rain gear, a doubles rack of trad gear, a 70m climbing rope, my harness loaded with all my equipment, climbing shoes, chalk bag, belay parka, two active layers, snacks for a day, two liters of water, camera equipment, about 20 climbing quickdraws, a climbing helmet, along with all of my assorted small goods in both pockets in the lid, and there was still room to spare!

From the wide array of features, I do have to state a few annoyances that I came across so anyone checking out the pack can take a look at the specific features and decide based on their individual taste and preferences.  The T-Rex system is great in many ways, however, the back padding that is attached with velcro to the back allowing for the adjustment to the T-Rex system of the pack just doesn’t sit very flush to the pack and somewhat protrudes.  It seems that the velcro just doesn’t have quite enough strength to keep the padding pinned and it sits forward slightly.  This left me with the feeling that something was between my back and the pack most of the time in the beginning.  I did get used to it over time and the pack was very comfortable around the hips, but it was definitely a little annoying at first.  I only mention it to emphasize that you should go into REI or another outdoor retailer and try on the pack because the T-Rex suspension system is a little different than most people are used to.  The other small complaint I have is that the shoulder straps are much more narrow than other packs I have used.  When the pack is loaded down completely, as it will be most of the time if you are doing extended backpacking or a mountaineering expedition, the pack is definitely not as comfortable on the shoulders over long periods of time as some other packs I have used.  Once again, everyone’s body shape is different so go try on the pack and see for yourself.

The EXPED Thunder 70 is a very capable and comfortable pack for carrying heavy loads on extended trips.  I personally loved the front opening feature allowing for quick access to any part of your pack which has been lacking in packs I have used in the past. If I go back and do the Colorado Trail again or take on a thru-hike like the CDT I will seriously consider the Thunder 70 for its rugged durability and versatile features. 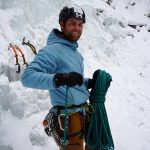 Zach is an aspiring alpinist, ski mountaineer, climber, and photographer. He is a Wilderness First Responder and frequently volunteers with the Colorado Mountain Club to help train future mountaineers. Zach works part-time as a marine biologist in Alaska and a wildlife biologist here in Colorado. You can catch him climbing around Golden where he lives today.