As an active participant of the digital age and a professional adventure photographer/videographer, having reliable and fast portable energy is necessary for work, and my sanity. The Goal Zero Sherpa 100AC Power Bank keeps my power-hungry essentials ready to go.

The Goal Zero Sherpa 100AC Power Bank takes the stress out of getting work done from the road. While I’ve only been using it for a few months, I can already tell it will travel with me for the next few years. I used it when outlets were taken at cafes, when I needed all my extra batteries on board in the backcountry, and when I was too lazy to find an iPhone charger. The OLED screen makes it easy for even the most electronically challenged to figure out how much power is being used or charged. Besides a few items that could make this product perfect, I am happy to call it my permanent travel buddy.

The Goal Zero Sherpa 100AC Power Bank accompanied me on a month-long road trip starting in Colorado, circling through the Grand Canyon, Death Valley, Yosemite, the Redwoods, the Oregon Coast, and then back through Yellowstone, and then up a 14er for good measure. It also went with me on a flight to a festival in the desert, and to the East Coast. I live in a van full time and work remotely as an adventure journalist. I am expected to be plugged in and creating content, even when off the grid. I put the Sherpa to the test, and it was able to carry its weight through it all.

The Sherpa 100AC Power Bank has two USB-C Power Delivery ports at 60 Watts each (for both charging the power bank, or charging devices), one 100W alternating current outlet, two 2.4A USB ports and a Qi wireless charger on top. Between all these options, there is a solution for every charging necessity. I used both the 8mm DC Input with solar panels to charge, as well as the USB-C Power Delivery ports. These ports are both input and output. You can manually set what you want them to do with the OLED screen and controls. I left mine on “auto” the whole time and never ran into issues with the Sherpa being confused. These devices are smarter than we are.

Only high power pulls (gaming computers running large programs) can max its power draw. I even plugged two laptops in at once and while it dropped the “time to empty” down to less than an hour, it held strong.

Each side of the Sherpa has a cable holder that keeps included cables (USB-C to USB-C, USB-A to Micro-USB, and USB-A to Lightning) packed away and lower profile until use. There is also a longer USB-C to USB-A cable included that I used mainly for laptop charging. There are two rubber runners along either side that act as stabilizers when laid on a table.

I charged it both with solar panels and through a wall outlet. The OLED output on the Sherpa is awesome to have while you’re working with solar panels. You can make sure you have your angle perfect by checking back to the readout to see if different positions get more or less power. I did some work on the side of the Grand Canyon and daisy-chained two panels to get solar input. While it wasn’t enough to power my laptop one to one, it was enough to keep it going for as long as I needed to work. This is called “Passthrough Charging” and is one of my favorite features of the Sherpa. You can tell if you are getting enough power to charge everything you have plugged into your Sherpa if it says “Time to Full” on the OLED screen. If you’re pulling more power than the Sherpa is getting from its power source, it will say “Time to Empty.”

Here is what Goal Zero says the Sherpa 100AC can charge:

I found that I got a few more than eight changes for my smartphone, but I also wasn’t letting my phone drain completely, then powering it all the way up and doing that again and again.

The Sherpa is the largest power pack you can take on an airplane! It has a 94.7Wh Li-ion NMC battery, and the FAA limit is 100Wh. It just passes under the max limits. I took the Sherpa on multiple flights, and it is more than enough to power your devices while in the air and through to your destination. It weighs two pounds and is about the size of your favorite young adult novel. I am usually packing my carryon well beyond stuffed, so I did have some trouble sliding it next to my laptop and tablet.

Performance is where the Sherpa shines. It is a reliable piece of gear, which is essential when you’re counting on it for one more laptop charge to meet a deadline. The OLED display lets you know exactly how much pull you are using, and will cycle through a screen that breaks it down by each individual port.

So far the Sherpa is a solid addition to my charging fleet. The aluminum outer makes it feel sleek and durable. The charging ports seem solid. So far, I have had no issues with anything breaking.

I’ve had many power banks in the past, but this is by far my favorite. The AC capability is a life changer. You can charge anything, not just USB devices. I charged multiple laptops, DSLR batteries, cellphones, drone remotes, and friends devices.

Goal Zero is leading the way in reusable energy. For ten years, they’ve actively participated in humanitarian projects and bringing solar and power to those who need it most. While I can’t speak to the sustainability of the materials (designed in Utah, manufactured in China) and production process, the products are built to last. Less need to replace your battery pack means less waste all around.

There are a few areas where Goal Zero could make this product exceptional. The first is it doesn’t come with an AC power cord to charge it. This is solved by using a brick to plug in the USB-A, but this cord could be added into the box so you don’t have to use outside electronics.

There is a current issue with charging DJI batteries for a drone. While some have been successfully charging the batteries from the Sherpa, mine won’t connect. When speaking with Goal Zero customer service they explained they’re experiencing compatibility issues with the DJI charger and a third party charger should work. They are currently working on it with DJI. The standard charging of the drone batteries is well within the spec, but there’s some type of technology in the DJI chargers that stops the Sherpa from working. Goal Zero said they will replace the unit when the problem is resolved and took my email for further communication.

I was having issues with charging the Sherpa to 100% (as shown on the OLED). When plugged in to charge, the battery automatically begins draining itself once it reaches 100 percent. So I may have had it plugged in too long, it reached 100%, and then started draining, so I saw it at 99% or 98%. This is a very odd issue to have for such an advanced battery system. I found this also to be an issue if I didn’t press the little power button when I was done using the power bank. If I forgot, it would stay on and slowly start draining itself. With most battery packs, you unplug and go, so it was hard to get into the habit of turning it off every time I unplugged something.

Lastly, the icon on the power button and the button to turn on the Chi charging system on top look very similar if you aren’t right up close. I often would press the Chi button thinking I was turning it off, but not actually doing anything.

The Goal Zero Sherpa 100AC Power Bank takes the stress out of getting work done from the road. While I’ve only been using it for a few months, I can already tell it will travel with me for the next few years. I used it when outlets were taken at cafes, when I needed all my extra batteries on board in the backcountry, and when I was too lazy to find an iPhone charger. The OLED screen makes it easy for even the most electronically challenged to figure out how much power is being used or charged. Besides a few items that could make this product perfect, I am happy to call it my permanent travel buddy. 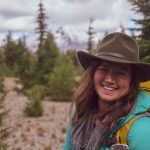 Roxy Dawson lives in a van full time and travels around the country working as an adventure journalist, searching for backcountry adventure, and using her dog as a pillow. Like most adventurers, she loves coffee, hot springs, and getting pretend lost. She works for Outdoor Prolink as the Content Marketer. She is trying to make a small positive impact on the world, and a larger one in her community. Follow her on Instagram at @roxyjan_