I have had one filter system for so long that I jumped at the chance to try a new one – The Grayl Geopress. It was adorned with slick matte colors and rugged design elements that spoke to my inner gear nerd. The box it was packaged in made me excited to open it, and the marketing team had launched a really attractive social media marketing campaign. However, after a month of usage I was left feeling… underwhelmed. I’m not so sure that the Geopress will replace my old filter. 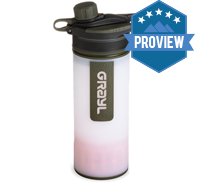 While the Grayl Geopress is a sleekly designed package with a pleasant color scheme, in practice it falls short of its expectations – taking much longer to filter than expected, and being completely inappropriate for dirty water.

Over the month that I’ve had the Geopress, I have used it in a multitude of scenarios – from overnight backpacking trips, to 14er summit pushes, to mornings fishing at the creek, and bushcraft outings in the woods. Through all of these excursions I developed a nuanced view of the Geopress. It has a small window in which it is appropriate to use, and it does not perform well outside of those parameters. Here are my thoughts:

Grayl claims that it only takes eight seconds to filter a full 24oz of water; however, I found that this only held true for the first few filtrations. After those initial presses, the press-time increased dramatically. Within 30 presses, the time had already increased to over 25 seconds – Grayl’s suggested replacement time. Now (in less than a month of usage) that time has increased to 38 seconds for 24oz of tap water. Since the filter is incredibly small (filters out 99.99% of viruses, 99.9999% of bacteria, and 99.9% of protozoan cysts), I would expect it to clog if I was filtering cloudy, silty, or standing water; however during my testing I EXCLUSIVELY used it on clear mountain streams and tap water. It is certainly possible that the streams had more particulates than I expected, but they were clear enough to plainly see fish and the bottom. Additionally, another filter I carried (General Ecology First Need XL Elite – terrible name) had no problems in the same areas. On one occasion I used the Geopress to fill up multiple water bottles and hydration packs; it took 5 minutes and 27 seconds of pressing to fill 6L – roughly 5x as long as Grayl’s claim of 5L/m. It would be hard to justify using the Geopress if you had to gather water frequently for cooking and cleaning. Initially, for this review I wanted to test the press in incredibly dirty, standing water to see how it performed, but I became concerned that if I did it would be rendered completely inoperable.

Because of my concerns, I contacted Grayl to see if maybe I had received a faulty filter. Grayl responded with a canned response saying that it is possible the filter clogged with particulates or heavy metals “even in clear water” (direct quote). Again, maybe the water was dirtier than I had assumed. Because the filters cannot be backflushed, they suggested taking apart the assembly (thankfully an easy process) and drying it on a sunny window. I followed their directions and noticed a marked improvement – to twenty seconds.

Let’s put all of that aside. Perhaps I screwed up in the beginning and clogged the filter, and the filtration suffered from thereon. I actually love the idea of the Geopress, and in practice, it’s very simple to use. When I initially received it, I looked for instructions to make sure I didn’t skip any steps; however, the instructions are as simple as the tagline: Fill, Press, Drink. I really enjoyed that on hikes where I crossed streams often I could have fresh, cool water in almost the same amount of time as it took to take a Nalgene out of a pocket. Many times while traveling through South East Asia I would have loved to carry a Geopress so that I could fill directly from the tap instead of buying so many water bottles. Even though over time it took ages to filter, the clean water always tasted great, and I never got sick.

The Geopress is a very attractive, reasonably small package. It has robust design elements like thick plastic parts and a beefy rubber hinge – I couldn’t find any parts that seemed like they would break over time. The hanging hook is thick and keeps you from having to use the hinge to hang the assembly. Anywhere a seal is needed, Grayl has used a thick rubber grommet that will likely last a long time. The Geopress is also incredibly easy to take apart. Everything can be replaced easily, and Grayl has replacement parts on their website. Over time if Grayl decides to rethink their filter, you likely could replace only that part instead of the whole bottle. I really enjoyed the color and texture of the outside of the Geopress; however, the material used scratches surprisingly easy. This wasn’t really an issue to me since they are only surface scratches, but it might bother those who like their products to look new forever.

To filter water, you push down on rubber pads on top of the cap. If you are only filtering for eight seconds, it is not a big deal that there isn’t much surface area to press on; however, once it starts taking longer to press it becomes more and more uncomfortable. For instance, the time it took 5 minutes and 27 seconds to filter my hands started hurting. While I just ignored it and kept filtering, that might become downright painful if my hands were cold. Pressing harder did not make it filter faster either, so I ended up just having to deal with it. If it took less time to filter this would not really be a problem.

The cap of the assembly offers a few different ways to drink from the inner reservoir – first, it can unscrew entirely to offer a wide mouth bottle. I wouldn’t recommend drinking this way however because it becomes possible to accidentally ingest some “dirty” water on the outside of the bottle. While this may be unlikely, in areas with EXTREMELY dirty water it might be a concern. The second (and better) way to drink is the spout on top which also functions as an air vent during filtration.

(QUICKTIP: Make sure the vent is open when you are filtering water or pressure will build and it will become impossible to press down.)

It is very apparent that this spout has been carefully thought out as it has some nice features. The cap for the spout has a nice rubber grip which makes it easy to grab. It is also deep which protects the spout from getting dirty water on it and makes it impossible to cross-thread. The hinge is strong rubber and seems like it will last. Overall it is a very sleek-looking package.

The whole assembly is fairly light considering what you are getting (a filter and bottle in one), and it is comparable to a Nalgene in size. The Geopress is slightly thinner and slightly taller than a Nalgene which makes it perfect for fitting into cupholders or backpack water bottle pockets; alternatively, you could hang it from its hanging hook. When empty and new it weighs about a pound (15.9oz), and overtime as the filter collects water it gains a few ounces (~19oz). I found it to be an acceptable weight honestly because it allowed me to get rid of an extra water bottle from my pack. I didn’t have to carry a water bottle AND a filter system – only the Geopress. The version I received holds 24oz – I wish it held a full liter, but it is still enough to keep hydrated during hot treks if you fill up often.

According to their website, Grayl is launching a “Zero-waste” program aimed at starting in Summer 2020. Their claimed goal is to recycle spent cartridges users send to them in order to keep them from ending up in landfills.

My final thoughts on the Grayl Geopress are… divided. On one hand, it is a great idea implemented into a reasonably small package – an attractive water bottle that also filters. On the other hand, Grayl’s marketing is a bit misleading; they claim to be able to filter water in only eight seconds, but you will be lucky to hit that time more than twice. I was careful to only use the filter in clear mountain streams and with tap water, and still the time to filter increased immediately. If I were to follow Grayl’s advice of replacing the cartridge when filtering takes longer than 25 seconds, I would have had to replace the filter after two weeks of usage. At $30 per filter (30% the price of the entire system), this just isn’t reasonable.

So who is the Geopress for? Grayl has marketed this filter to anyone at all needing to filter water – from bushcraft/survivalists to travelers and hikers. In my opinion, this filter is only appropriate for those who consume a single bottle of water at a time. For a day hike where you are near to a CLEAR stream and won’t drink more than a few bottles of water, the Geopress would work nicely. Additionally, if you are traveling and staying in hostels overseas, this is a great filter system for drinking from the tap. It completely removes the annoying dependence on water bottles. Anyone who is in or near freshwater all day (fishermen, kayakers, etc.) would appreciate the Geopress.

However, if you need to fill containers for eating and cleaning (bushcraft, camping, etc.), the Geopress probably isn’t appropriate – especially if you’re filling from a stream that has any sediment at all. By Grayl’s own admission, the Geopress will get clogged quickly – even by “invisible” heavy metals in clear streams. While it is still technically filtering the water, it takes an unreasonably long time and makes me question the efficacy. Before buying the Grayl Geopress, I would heavily caution you to consider how you will use it while recognizing the cost to replace the filter. It’s not for everyone, but certain people will love it.

Shop the Grayl Geopress on Outdoor Prolink. Not a member? Apply today! 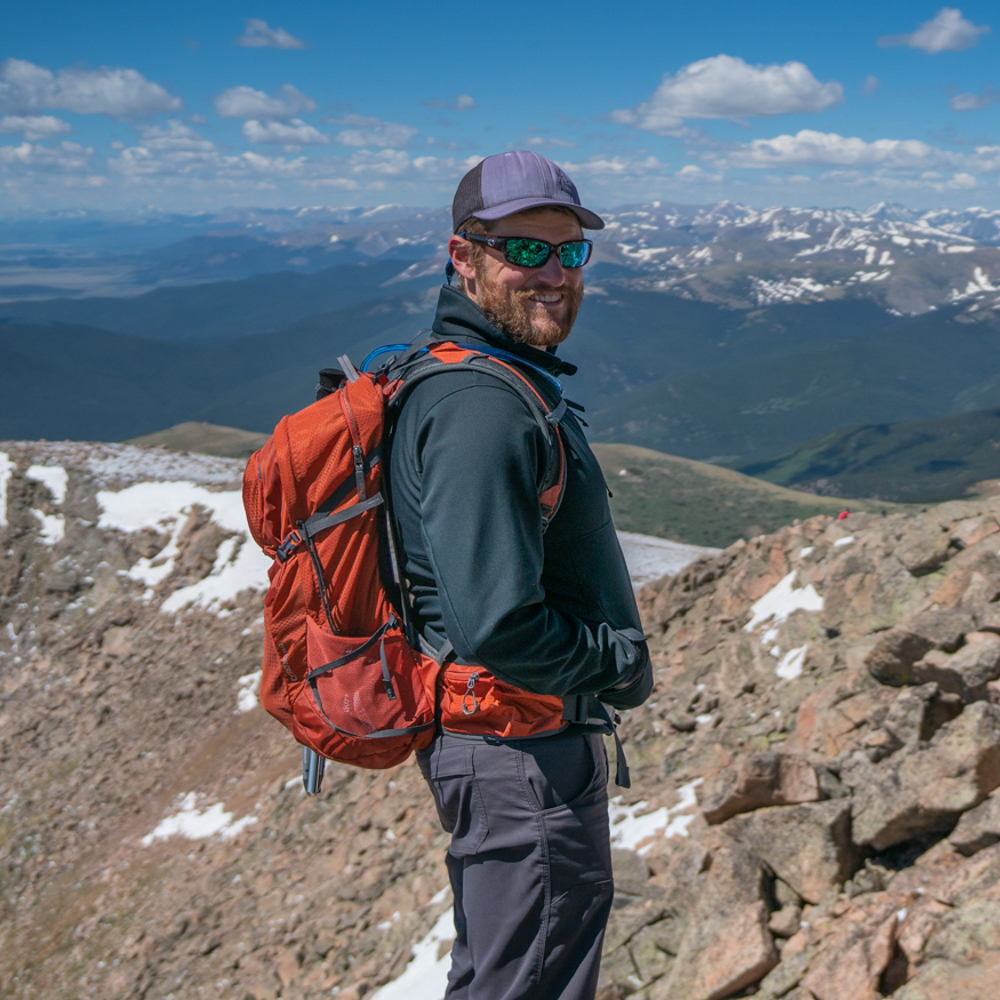 Daniel John is a commercial and editorial photographer in Boulder, Colorado with a passion for travel and adventure. Daniel’s obsession with photography was cultivated during a year-long backpacking trip through Asia and Oceania where he documented incredible places and people. When he isn’t editing photos, you can find him exploring the mountains and streams of Colorado. You can connect with him on Instagram (@ImagesByDJ) or through his website.