Over nine months ago, my girlfriend and I started planning a month-long summer bouldering trip to the Rocklands of South Africa. While not remote, it is still a trip of considerable distance and travel, requiring 30 hours of flight, renting a car, driving from Cape Town on some thin mountain roads and plenty of dirt paths- changing accommodations several times over the course of a month. 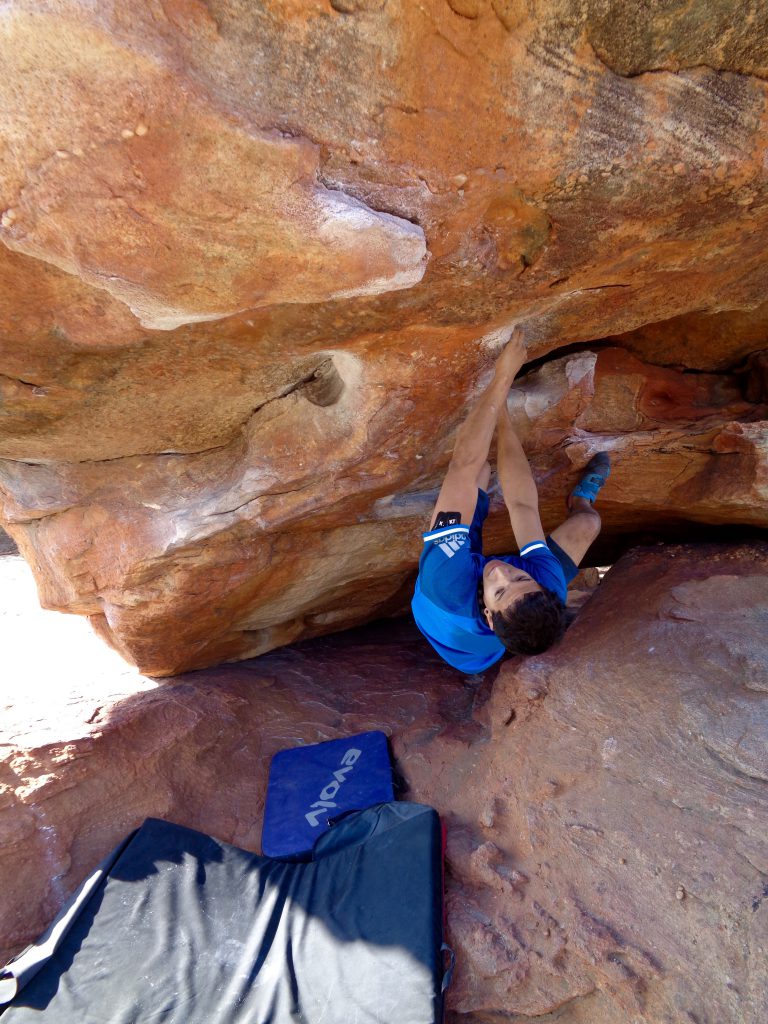 While we knew the primary goal of the trip was to climb as much as possible, it just isn’t the best practice to climb 30 days on. The skin and body can only handle so many days of hard climbing movement, and we scheduled in lots of side adventures like shark diving, safaris, and hiking up Table Mountain. Knowing that most of our baggage allowance would be pushed onto the crashpads, I wanted to find a solid expedition pack that could cover all the clothing, gear, electronics, food, and other assorted items we would need for the month.

When I initially opened the box, I was surprised at how small it seemed for a 70 liter pack. But as I started packing a months worth of life into it, the pack just kept expanding without losing it’s streamlined figure. It held all the clothing and climbing gear for the month, running and climbing shoes, a yoga mat, and a foam roller, with room to spare. When it was all finally packed up, I had approximately 40 lbs of weight in the Aether, and had yet to even put any gear
into the removable summit pack component!

Traveling around with crashpads can be awkward enough, but the anti-gravity suspension system that Osprey uses makes this one of the most comfortable packs I’ve hauled around. Whenever it came between being the person to carry the 10 lb crashpads or the fully loaded backpack, I caught myself always grabbing for the pack, much preferring the well-distributed weight and cushioned padding to the rectangles of foam. We were lucky to not deal with severe rain for most of our trip, but there were a few torrential days in which the waterproofing system got to shine, keeping the inner contents dry, as
well as drying quickly when we returned to our cabin.

The number one feature that I loved about the Aether 70, though, was the detachable top lid, which is a fully featured day pack with multiple zippered entry points, a smaller chest strap, and its own H2O reservoir. This smaller summit pack became the go-to for every day of this trip. From being loaded with extra climbing gear, storm shells, and food on days spent climbing in Rocklands to storing our swim and sensitive camera gear on boat trips to see sharks. We even used it as a general hiking pack when we visited Table Mountain (and where I would get pointlessly competitive with the “suggested hiking time” and sprint up stone steps to see if we could do it in half time). If we were climbing, I would stuff the daypack into a crashpad where it would easily compress down and allow me some visibility in the back of the car, as well as protect our food from the filcher birds that would hang around the boulders, attempting to peck their way into our food supply.

Bottom line, the Aether 70 AG is among the top backpacks I’ve used on any international trip. It is built to hold a significant amount of weight, and I’ll be excited to take this pack out into more remote areas of the US, knowing that it can easily hold the entire set-up for two people to disappear into the woods for a good chunk of time. After a month of being dragged around rocky fields, thrown in and out of cars and planes, exposed to constant rain and sun and an ungodly sharp plant called the sweet-thorn bush, it shows virtually no signs of wear.

I strongly suggest checking out this pack for your next adventure! And, as always beware of the lions!

Mike Kimmel works as the Department Head for English Language at the Vail Ski and Snowboard Academy, a public high school that works exclusively with competitive skiers and snowboarders (ranging from Alpine skiing, freeride, all forms of snowboarding competition, and nordic). He is also a climbing coach and primary routesetter for the Vail Athletic Club, and a guide for Adventure Travel Guides. He’s worked as a setter and coach for 10+ years, and has sent many young climbers to USA Nationals, and a few kids to Continental Championships.