I felt like a kid at a birthday party opening the much-awaited Osprey Mutant 38 alpine climbing pack. It looked sleek and streamlined online, and now I was about to ground-truth my expectations.  As an alpine, ski, and rock guide, I have accumulated a respectable quiver of packs.  Backpacks are one of the Achilles heels of guiding: I reckon that I wear a pack of some sort for well over three-quarters of a calendar year between guiding and recreating, so form and function are of utmost importance, and I have little tolerance for uncomfortable and poorly-designed packs.  The Mutant 38 is designed as a lightweight alpinist pack, and I was able to test its function while alpine guiding on Mt. Hood, as well as taking it on a  three day ski mountaineering journey to ski the two highest peaks in the Boulder Mountains in central Idaho.

I ordered a M/L in the Mutant 38, which fit my fairly standard 5’11 frame perfectly.  The hip belt sat nicely on my hip bones, and the pack was centered on my back, not riding too high or low in relation to the shoulder straps.  I appreciated Osprey’s attention to detail throughout the pack: 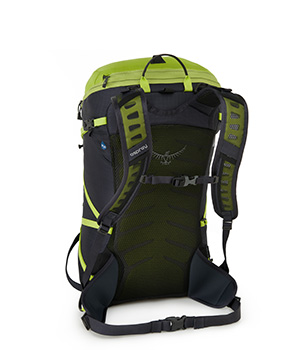 First off, I have to say that I really like this pack.  As with all outdoor gear, there is lots of hype surrounding specific types of products.  I owned a specific alpine climbing pack for a number of years until it was beyond repair.  It seemed to be the “brand-du-jour” within the alpine climbing community, and I tried really hard to like it, but I never really did.  The Mutant 38 is another story all together.

I was very impressed with how comfortable this pack is, both with a load that was probably too heavy for it, as well as when it wasn’t packed full enough.  Going into the Boulder Mountains on a ski mountaineering mission, I almost used the full capacity of the pack.  I was impressed that 38L could hold a full skimo kit plus food and fuel for our three day mission.  This was impart due to the extendable skirt, but also due to the well thought-out form of this pack.  The helmet stored nicely on top of the lid, and I wasn’t worried about destroying it, skis slipped nicely into the compression straps on the side, and I was even able to get our 30m skinny rope inside the pack on the way in.  On the way out, I draped the rope through the under-lid rope catch and it slid nicely into the compression straps next to my skis.

While I did feel the weight, I was impressed that this pack handled it as well as it did.  I’ve had other similar sized packs with beefier suspension and padding that didn’t carry a load as well as the Mutant 38.  Using this pack in its designed function, as an alpine climbing pack, I was psyched.  It climbed extremely well both full and half-full.  I have had packs that felt atrocious when their volume wasn’t used- this was never an issue with the Mutant 38.  In fact, most of the time, I didn’t ever feel that it was there.  This is a huge benefit on harder pitches: I was able to stay focused on the climbing instead of cursing the pig on my shoulders.  It was fluid and comfortable.

The Mutant 38 held all my gear well while climbing.  I was never worried about my 2nd tool swinging off while on my pack, and snow pickets nestled nicely along the side and were easily retrievable without taking off the pack.  As mentioned above, an equipped crampon attachment system is lacking, but allows the user to custom tailor it to their needs.  The gear loops and ice-clipper slots on the waist belt were welcomed and helped gear organization while climbing.  The size of the pack and the lid/flap options up top allow a customizable experience based on the objective.  When alpine guiding, I often have much of the rope stacked in my pack, and ready to pull out based on terrain dictation.  I like how I could simply cover the opening of the pack with the flap without cinching the drawstring, allowing me to pull the stacked rope out of the pack, with pre-rigged knots and all.

In closing, I must reiterate how psyched I am on this pack.  I found it to be more than adequate for ski mountaineering, although its technically outside of its designed use, and found it to be the best alpine climbing pack that I’ve used to date.  This pack will undoubtedly replace my similar-sized alpine pack, for both recreational objectives as well as during a long summer of alpine guiding in the Oregon and Washington Cascades.

Shop Osprey on Outdoor Prolink. Not a member? Apply today!