The Art of the Project: Get After Rocktober (and Mental Health)

Author’s Note: While this post contains many climber jargon-specific words, the content shared herein leans into an educational approach in an effort to make climbing more accessible. Where possible, I’ve either defined jargon or linked out to another resource that can share more context. See a word you’d like defined? Let us know in the comments section below!

“To send: to climb a route or complete a boulder problem with zero falls.” Ideally, when we show up prepared, psyched and try hard, we’ll send that climb we’ve been eyeing, right?

Wrong. Oftentimes, sending (also known as flashing) doesn’t just… happen. Learning to send is part of a more holistic approach to skill-building. It includes emotional and mental resilience in addition to technical skills that help you surpass your upper limits as a climber. For those interested in pushing grades*, it’s critical to learn how to project rock climbs that can help you expand your skillset.

With Sendtember, the month of gloriously dry and cool climbing conditions, well underway, let’s reframe how we approach the work before we send. Ready for the realness? Read on for tips from prolific climbers Shara Zaia, Kate Rutherford, and Lena Palmer. 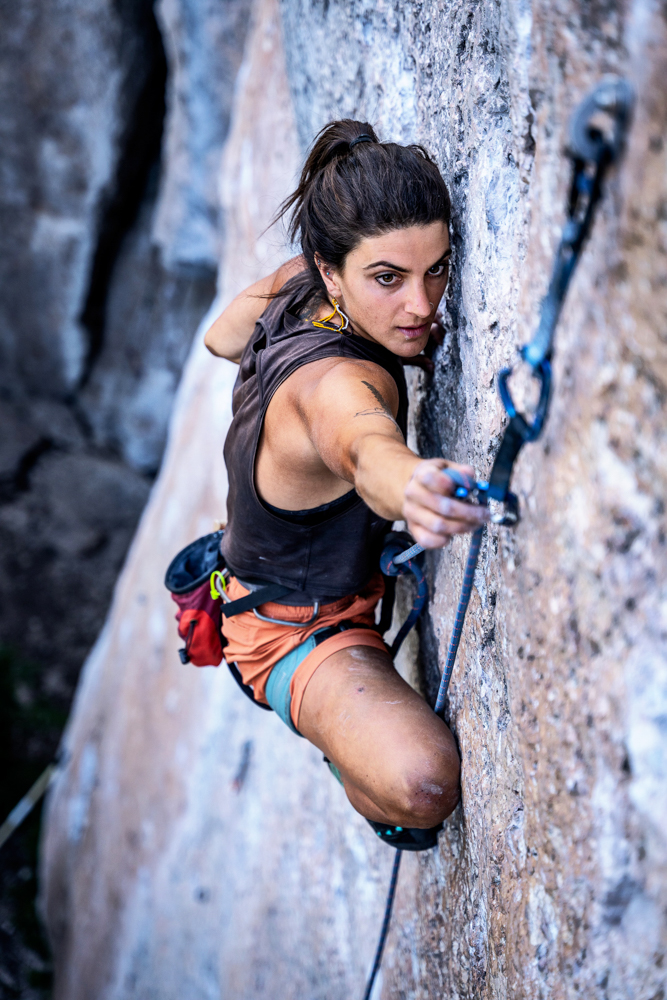 Dani: “What’s one thing you’ve learned from projecting over the years that you want to share with others?”

Shara Zaia: This summer was actually my first time having a long-term project and it was such a learning experience. One thing that was really challenging for me early on was feeling like I didn’t deserve to be on the wall as much as other climbers. I was extremely hesitant because this particular project felt far beyond what I thought I was capable of.

When I sat with that hesitation, I realized that I was simply sitting face to face with my fear of failure. A fear that has been ingrained in many of us since our early years when we were taught that our value was based on our ability to perform socially, academically, or physically.

A good friend of mine recently gave me a sweatshirt that reads “nervous means do it.”

Remembering that, I decided to try the climb just to feel what it was like. When I first got on the route, it felt impossible. I couldn’t string more than one bolt together let alone pull the crux moves. I kept catching myself sitting out at the crag to let the “real” climbers have time on the wall so I wouldn’t inconvenience anyone with my slower progress. Normally, if I didn’t feel initial success on a climb, I’d try something else. I wanted to give up so many times.

It is so easy to see a route as one singular project. But each climb is made up of so many smaller projects. So with each time I got back on the route, I learned something new. Each movement became a secret for me to unlock. Before long, I had unlocked so many secrets that I was one hanging a route that I initially couldn’t get up.

While sending is incredible, a send isn’t what makes a “real” climber. Sometimes you show up, give it your all, and still miss. The beauty is in the attempt – the connection, the laughs, the failure, the growth in overcoming yourself.

Too often, we focus on the end result and fail to celebrate the PROCESS. So while I walked away from this project without a send, I wasn’t walking away empty-handed. After all, I grew so much by simply tying in.

Dani: “What should people keep in mind when picking out the projects they want to work on?”

Try beyond your self-imposed limits! Projects become projects because they are difficult for us. If you are sending a climb in a few tries, it may be time for you to try something that challenges you a little more whether that is mentally, physically, or emotionally.

If you’re trying to break into a new grade, consider a climb that suits your style. NO, that doesn’t mean it’s soft. Just make sure you’re climbing it for the right reasons. If you aren’t having fun anymore, it may be time to step away.

Follow Shara and her Colorado-based climbing organization, Cruxing With Color for more! 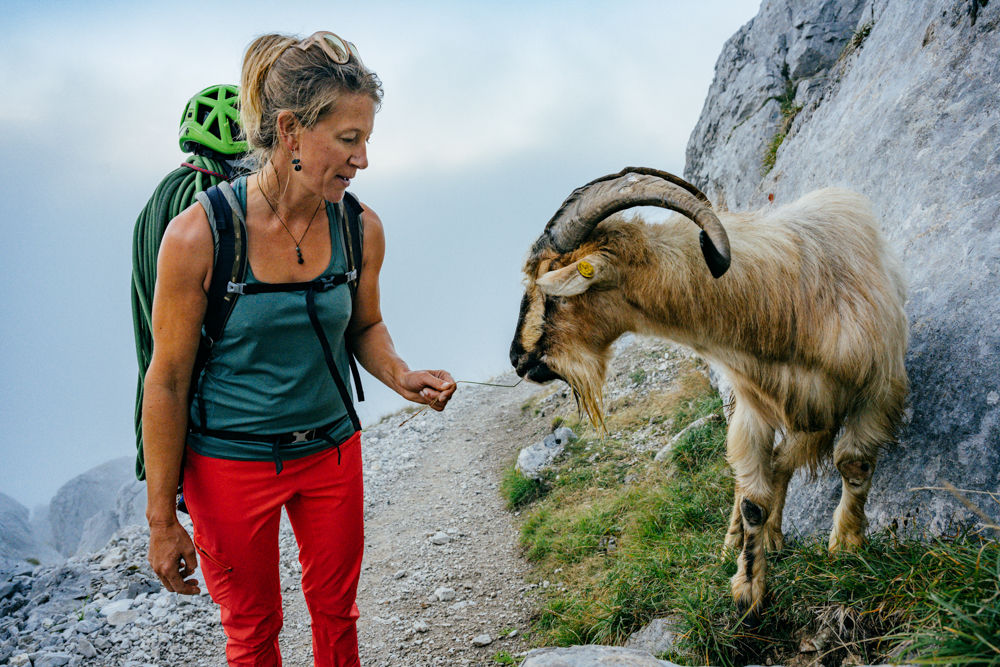 Kate Rutherford: I’ve learned that practice and patience make moves easier. Things you never thought possible become familiar and fun. I’ve also learned that after many tries, I build up an energy of really wanting to do it, and care in a different way, and then am able to apply myself in a more focused way. ([This idea] applies to the rest of life as well).

I like to work on projects that are beautiful, fun, or in a place I love to spend time. Setting yourself up to find joy in the place and people even if you fall off is ideal. And in the end, a project is just a project. It does not have to own you, and you can learn a ton even if you don’t send. Start with easy projects, where it takes you three tries or so [before you send]….and [complete] many of those before moving on to something that takes ten tries or a whole year…

There is so much calmness that can come from repetition and so many mysterious connections that happen between your body and brain that you can take to onsighting or mountain biking, skiing, running, anything.

Learn more about Kate, her sustainable, local-food finding nonprofit, Farm to Crag, and her jewelry. 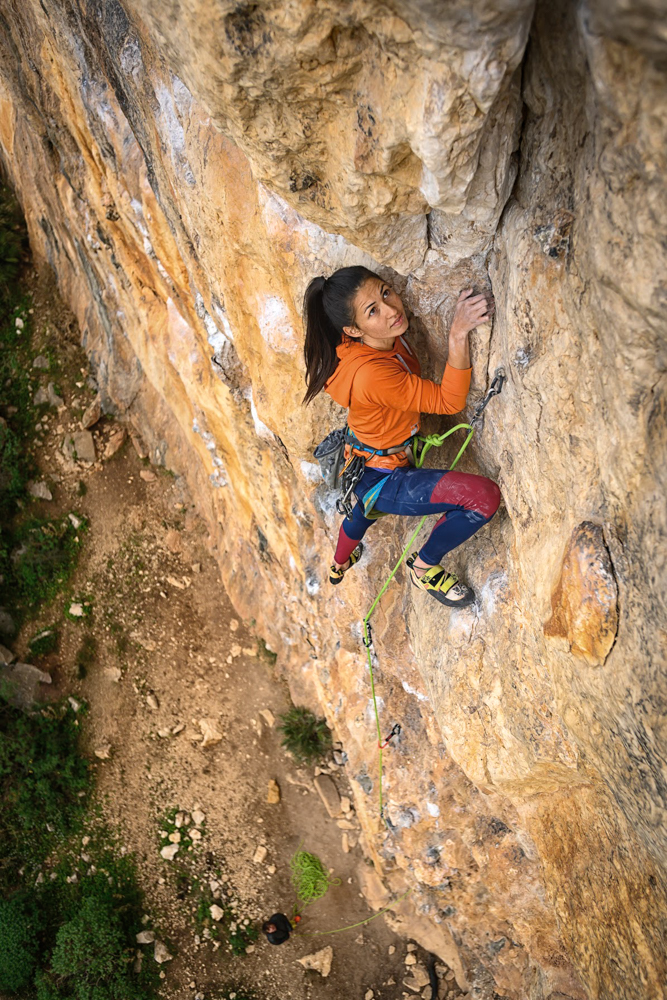 Lena Palmer: The biggest thing I’ve learned from projecting is that you’re stronger and can climb harder than you think you can. Climbing shouldn’t be solely about chasing grades, but sometimes we make assumptions that certain grades are not “for” us.

The truth is, if you’re willing to dedicate yourself to a goal, you’ll probably surprise yourself with how far you can go. I had climbed a small handful of 5.11 before projecting and climbing my first 5.12a. Less than a year later I sent my first 5.13a. I didn’t get that much stronger in that year, I just learned to believe in myself and believe in my process.

Dani: We’re hearing a lot about the process. Can you give us some insight into what you keep in mind when picking a project?

The next thing is if the project fits your lifestyle. If you’re living on the road and climbing everyday, you basically can pick anything you want. But if you have limited climbing time, you need to take into account how accessible the route is to you. If the approach is long or it’s a far drive, you need to take that into account. So picking a project is a balance of inspiration and what’s currently accessible to you and your time.

When I lived out of my van I picked whatever I pleased. Now that I work full-time and have a place I’m tied to, I choose local projects that I can visit on the weekends. It takes longer for me to send than it used to, since I can’t dedicate as much time as I once could, but that’s ok too.

The benefits to projecting aren’t just limited to sending your next climb. Projecting climbs gives us the opportunity to welcome adversity—and the growth that inevitably results from it—in a safe, supportive environment. In a time when turning away from the hard conversations in life only results in the false security of safety, projecting gives climbers one way to begin to own their place in a changing world.

Learn to focus and work through the moments that present themselves. Lean into the discomfort that challenging objectives offer. And breath, deeply, to find the send ahead.

DEFINITION: “Pushing grades” means to work on increasing the upper limit of your climbing ability.

Athlete and storyteller Dani Reyes-Acosta aims to inspire individual action and collective communion through self-care and self-determination found in the outdoors. After leaving cushy corporate life to find her way back to her roots, she ticked rock climbs and ski lines across Argentina, Chile, Canada, and the USA on a circuitous path to self-actualization. Find her online as @NotLostJustDiscovering or via DaniReyesAcosta.com

Back to School: Remote Outdoor Education