Women in the Backcountry, Part 1: Why Do Women-Only Spaces Matter?

“There it is!” Jen’s voice rang across the cirque as the mid-morning sun slithered striped shadows across the north-facing slopes we planned to ski. She pointed, I gawked. We needed to hustle: we still had a good distance to climb before we’d be above those beautiful ski lines.

A friend I would make years after this experience would tell me, “Slow is smooth, and smooth is fast.”

In that moment with Jen, I felt like I’d found home as a woman in the backcountry. We talked about gender dynamics in snowsports, what it means to be a guide and athlete, snow science, and our hopes for the day. Like all good mountain people, we took plentiful snack breaks.

Women that carve out their own spaces in the backcountry community thrive. Whether we are skiers or splitboarders, snowshoers or snowmobilers, guides or gumbies*, our experiences—both on and away from the snow—define our success in the mountainscapes that call us. For many of us, these experiences inform our dedication to and love for the sport, the way we advocate for public lands, and our beliefs in the power of community.

As Elle Biesemeyer writes for AdventurUs Women, “There is tremendous power in coming together to center growth, joy, and community in a world that does not allow us those experiences in abundance.”

Why wouldn’t we celebrate these experiences with space that centers an aspect of our identities so often quashed in snowsports? Gender identity is important: as a social construct, it informs the norms we adopt as both individuals and a collective.

An Early Crux: A Very Brief Review of the Evolution of Skiing

History tells us that men pioneered skiing, first as leaders of the hunt over 7000 years ago. Then, early man chased game like elk and reindeer across the frozen tundras of China, Norway, Finland, Russia, and Sweden. Hunting by ski led to a better chance of survival and still continues to this day for some indigenous people in these areas. (Get a bigger picture of the history of skiing here.)

As many humans moved away from nomadic ways of living to organize in war-making and agriculture-cultivating city-states, men led those decisions, too. As society evolved, so did social norms: patriarchal customs pervaded many cultures around the world.

Patriarchy—a social system assigning leadership, authority, privilege, and control to those fitting the traditional male archetype—determined how the story of skiing (as well as the rest of Western civilization) unfolded.

Where were the women, you might ask? Not skiing, at least not as far as ancient history shows us. Invisibility is just one aspect of what we’d come to know as “gendered power relations” in the backcountry.

“In a mixed-gender group, I am always aware of how my gender affects the rest of the group. When I’m the only female in the group, some men will push beyond their limits to show they can keep up with ‘the girl.’ Many times this is unconscious for them but has been taught to them throughout their lives. And not all men do this, but definitely the majority….”

Kari Brandt, founder of the Women of Patrol community and Ski Patrol Director at Nevada’s Diamond Peak, shared the above with levity. She continued:

“Male-dominated environments can create an ego-driven culture, which we see [often] in the backcountry. The human factor of going bigger and faster and harder can risk lives”—and in my experience, compromise fun.

Indeed, the masculine energy of aggression and objective-driven achievement is one major reason why many women seek to cultivate women-specific spaces or touring groups.

“Outdoor recreation in backcountry areas is perhaps one of the few strongholds of gender-specified roles in Western societies. Mountains or remote national parks have been traditionally imagined and marketed as environments to be ‘conquered’ and ‘tamed’ by men” write Kristin Godtman Kling, Lusine Margary, and Matthias Fuchs in a piece exploring gender (in)equality in the outdoors. This singularly driven approach to achievement often minimizes the depth of the range of experiences we can have in the backcountry.

Jen Gurecki, founder of inclusive ski and snowboarding gear company Coalition Snow, reminds us that time in the backcountry with non-men can bring “a whole lot more nuance to the experience; the objective isn’t necessarily reaching the summit.” While backcountry touring to reconnect and center, she is there to “spend time with good people…to [get to know] all these other components of the experience.”

Women that shaped modern backcountry ski culture in the United States—all from Western states like Colorado, Wyoming, and Utah—did it for the love of the snow and the ‘deep ecology’ of the experience. They weren’t just there for the summits and the sends: they were there for the community and the closeness to nature.

The Queen of Teton Pass (WY) Elizabeth “Betty” Woolsey helped establish her corner of the world as a hub of accessible backcountry skiing first with the founding of Trail Creek Ranch in 1942. The former Olympic skier became a bedrock of the Jackson community; guiding guests with fellow legend Margaret “Muggs” Schulz into the Teton Range, Gros Ventre Range, and Yellowstone, these two hardened women of the West shared their passion for the mountains, openly. In the process, they helped usher in a golden era of community and conservation that continues to this day.

These women also “served and inspired other women, especially younger women around them,” writes one fan of another Jackson skier and rancher Virginia “Ginny” Huidekoper, also the founder of the Jackson Hole News and Guide. Paying it forward becomes, for many women in backcountry skiing, a way to honor those who have helped them get into the higher reaches of the world.

In an interview with Outdoor Project, Angela Hawse, UIAGM/IFMGA Mountain Guide and President of the Board of the American Mountain Guides Association counts giving back as the sole focus of her career at this point: focusing on DEI initiatives, environmental advocacy, and stewardship, she sees “women pushing to have a voice in more active decision-making” both on and off the snow.

To her, being a woman in the backcountry “means to be seen in the space commonly occupied by mostly men.  It means being confident, capable, and participating in the process and backcountry code of taking responsibility for ourselves and our partners.”

That is all I, as a powder snow lover, can aspire to share as well. To be a woman in today’s backcountry skiing and splitboarding community isn’t just about speaking up or asserting our presence: there is a link to the cosmos we can find when learning to move with the mountain.

“Everything I know, I have learned from skiing powder.” — Dolores LaChapelle

The First Lady of Powder Skiing, Dolores LaChapelle, invented the basis for today’s modern powder turn with a “smooth and rhythmic pivoting roll while the upper body remains quiet and calm.” writes Paddy O’Connell for Freeskier. Moving her body with an undercurrent of joy, she brought the movement of the mountain into human form with a muted force, a softness.

In her later years, at her home in Silverton (CO), LaChappelle continued to pursue her “endless search for the state of nothingness, the state of powder skiing,” but changed forms: she traded Tai Chi for two planks, perhaps hovering closer to a different kind of nirvana.

The movement of skiing and snowboarding gives us a release from our mundane worldly existence. It is an awakening to whatever version of our higher selves can be found on any given day. And it is a place for us all to share the narrative of our own story, whatever the plot may be. Whether we’re dropping steep couloirs or bootpacking mellow backcountry terrain for the first time, we all belong here. We are all valid.

As we prepare for a winter that will likely swell our backcountry skiing and splitboarding population like never before, I can’t help but think that there’s an overlap between how we all exist in mountainscapes and the way we interact with each other—that bit about shared responsibility and kindness as much as finding self. I heard Jen Gurecki echo my own sentiment: “everybody deserves to be outside, even beginners.”

In times marked by a pandemic and social upheaval, our involvement as women, storytellers, athletes, and partners is more important than ever. We can democratize joy by sharing our narratives, experiences, and histories. We must tell our stories. Going forward, and in the rest of this four-part series, we’ll explore the roles and future that women in the backcountry can play—both in the mountains and the world. I hope you’ll stick around for the journey, and remember that none of us have anything to prove.

Our existence here is joy. Our joy is the basis of resistance. And our resistance—our collective ability to reject the naysaying narrative and flourish in even the harshest climates—makes us stronger.

Like Dolores says: ““Everything I know, I have learned from skiing powder.” May the season of learning, growing, and slaying pow begin.

Keep the reading and education going! Check out Women in the Backcountry, Part 2: Avalanche Education and Building Competency

*Gumby (plural: gumbies), Jerry, (n.). A newer skier or climber who has yet to learn the nuances of the environment in which they travel. Indicates a lack of understanding or technical skill, sometimes which may lead to deadly consequences, a gumby is the opposite of a well-trained mountain guide.

*This article does not speak explicitly about non-binary people because as a cisgender woman, I can only speak to my experiences in the backcountry from my personal perspective. I also have not included non-binary people in this conversation so as to not project my experience onto anyone. Inclusivity and safe spaces in the backcountry is certainly a valid and important conversation, and deserving of its own space. 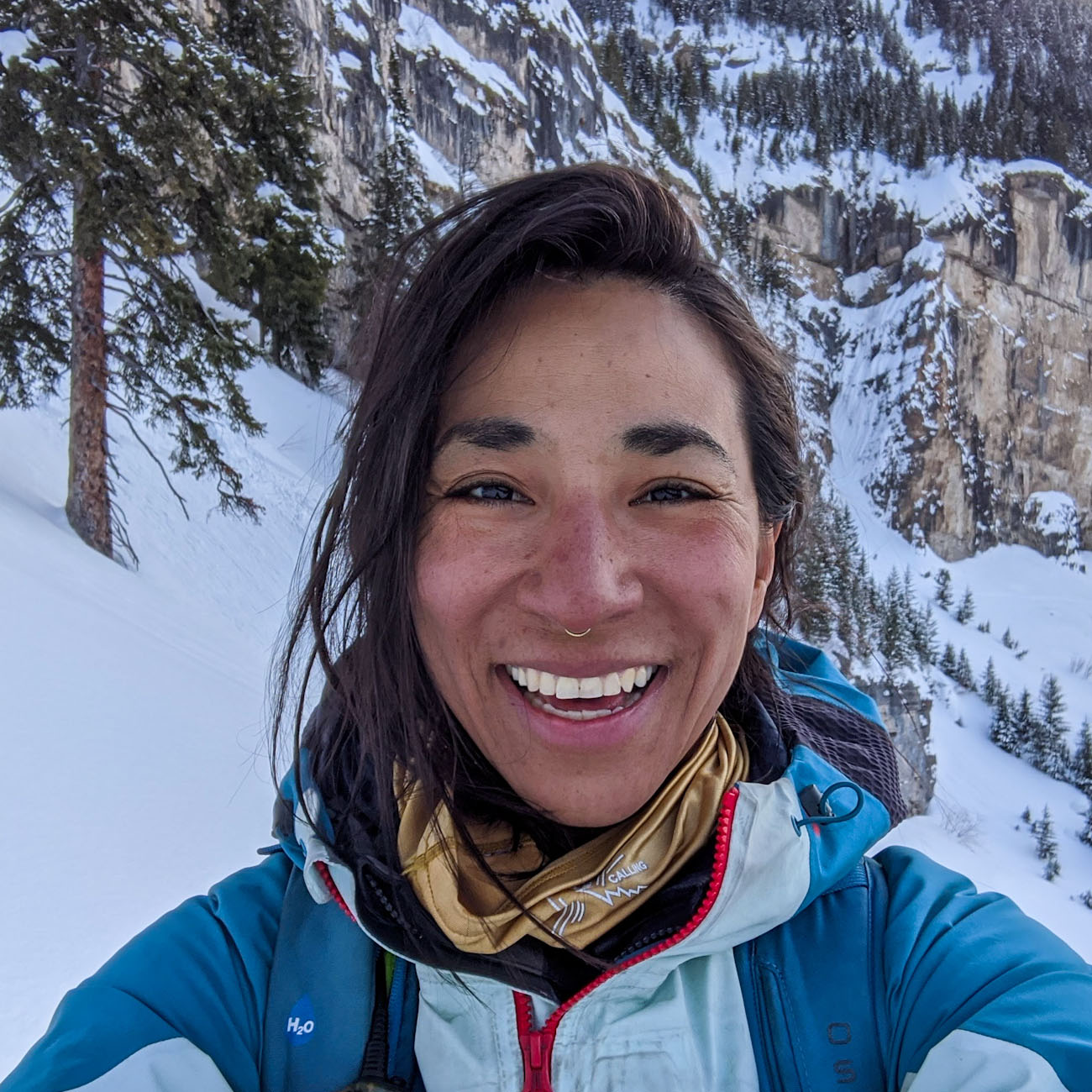 Dani Reyes-Acosta (she/her) is a strategist, storyteller, athlete, and advocate based in her van, El Torito Blanco, or on a rural homestead in SW Colorado. With names like Nike, Vail Resorts, the Association of Pro Patrollers, Sport Obermeyer, and Outdoor Research on her client list, she loves an exciting project redefining who plays outside and how we build community with others on this planet.