The Men’s Kor Preshell is a lightweight, packable layer that I tested across three national parks and over 50 pitches of climbing. Overall, this is a solid wind layer that deserves its spot on your harness (or in your pack), even though it is lacking in some key features that would really make it shine. 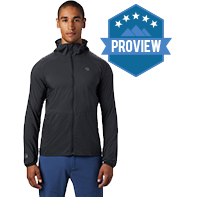 Product Description: When a hardshell is too much and a midlayer is not enough, the Kor Preshell™ Hoody is the layer you've been missing. It's both weightless and water-resistant⏤durable and pliable⏤roomy and stows in its own pocket. Call it an ultralight softshell or a super breathable wind shirt, but we just call it the do-it-all stretch layer for cool-weather trail runs, aerobic ski tours, big alpine rock routes, and...well, just about everything.

The Kor Preshell is a terrific, lightweight, packable, breathable niche piece that provides warmth and cuts wind at an almost-zero weight penalty. If you plan to run, bike, climb, or recreate with intensity, the Kor deserves a spot in your pack.

I work as a climbing guide on the Front Range of Colorado, and the weather is variable, to say the least. I think this layer shone in two distinctly different weather conditions.

First, I loved having this on my harness for longer multi-pitch days in warm weather. I brought this shell on both Crimson Chrysalis and Epinephrine in Red Rock Canyon. While temperatures in Las Vegas were expected to be in the low 90s, both routes are about 2,500’ above surface streets in the city, and they are in the shade. Both of them are also 1000’+ in length, so wind is a significant factor. In both instances, the Kor performed perfectly. I could quickly take it off my harness at belays and retain the heat that I’d just generated from climbing. It does a fantastic job cutting the wind, and it also does a great job at retaining just the right amount of heat.

Secondly, I really liked using the Kor as a layering piece under other insulation in Yosemite. My partner and I climbed Royal Arches as a low-pressure system was descending on the Valley, and daytime highs dropped from the low-80s to the mid-50s. On cold, blustery mornings, I would layer the Kor under a lightweight synthetic puffy. The puffy doesn’t do much in the way of cutting wind, so another layer is necessary (similar to common layering systems in the PNW where puffys often go outside of hardshells). The Kor was fantastic for this purpose. A hardshell would work just as well (shout out to the fantastic MHW Exposure Paclite), but even the lightest of hard shells are bulky and heavy when all I need is a wind layer.

I was excited to test this piece because I’m always curious about the breathability of pieces that are intended to block the movement of wind and water. First things first, the Kor is comfortable, but light. When I put it on for the first time, it felt as expected: light and airy. It’s slightly bigger than a medium-sized shirt or sweatshirt, but that’s a good thing, considering it is intended to be layered over other clothing. I also layered it under a puffy and a synthetic softshell and it didn’t snag or rug annoyingly on layers on either side.

The Kor moved in every direction that I wanted to move and never hindered my range of motion while climbing. The fabric is soft enough to the touch, and the inside of each hand pocket is roomy. I tested this jacket on long approaches in both arid and semi-arid conditions (10% and 30% humidity) and never felt clammy or wet. The Pertex Quantum Air fabric does an absolutely amazing job at breathing, it might be the most breathable layer that I own or that I have ever worn!

The Kor looks like a softshell jacket, and I think that’s cool. The entire jacket is sleek, one color, and has tastefully small MHW logos. You’ll be stylish as you blow by others on the approach when not weighed down by a heavy jacket, anyways.

The features that the Kor includes are as much a high as the features that it excludes are a low. First, the articulation at every touchpoint is very well done. The hem on the waist and the cuffs are just the right amount of stretchy to stay in place and keep their shape. The zipper comes up to a comfortable height on my neck and does not feel restricting.

The pockets on the Kor are an interesting dilemma. On one hand, Mountain Hardwear was able to fit TWO hip pockets onto a jacket that is less than 5 ounces. Nuts. On the other hand, I am a really big fan of breast pockets on outer layers. While climbing, I really want to have a chest pocket for easy access to my phone, a route topo, snacks, or chapstick. While the hip pockets accomplish this, the location is not ideal, especially while wearing a harness.

Lastly, I was very disappointed to see that the hood on the Kor is not helmet-compatible. Considering the piece’s namesake, it seems like a somewhat egregious oversight (unless the Kor is derived from something else). I don’t consider this a deal-breaker, but it is rather anything to have to take my helmet off just to put my hood up.

First, I weighed the Kor in at 4.5 ounces, and that seems absurd. A long sip of water weighs 4 ounces. It is, by far, the lightest and most packable layer that I own. I think I have socks that weigh more! The point is, you won’t notice the Kor while you’re wearing it (in a good way) and you won’t know it’s in your pack or on your back, either.

Secondly, I absolutely love the stuff pocket on this piece. Almost every other pocket-stuffable jacket that I own zips into its own hip or breast pocket. The Kor actually adds another, interior right side pocket that the jacket stuffs into. This pocket is articulated so that the final shape is analogous to a capsule – encasing the entire jacket (see the photo of the Kor on a harness). It’s small enough that it really can be clipped to the same carabiner that I keep my knife and belay device on.

Similar to other windshells and ultralight softshells, durability is not a strong suit of the Kor Preshell. I don’t consider this a downside – you almost always have to consider a tradeoff between durability and weight. That being said, I don’t think the Kor is “fragile” or in need of “special care.” But, I wouldn’t plan to chimney for a few hundred feet in this layer, of course, it will rip. I comfortably work it on dozens of pitches without being concerned that I would put a hole in it, but the durability is something to factor in.

Like many outdoor companies, information on Mountain Hardwear’s environmental policies were difficult to find. That said, they have a statement on their website:

“Our sustainability vision is to progress the potential of business to contribute to a sustainable future. At Mountain Hardwear, we have an important role to play in creating a future where we can meet the needs of the present without compromising the ability of future generations to meet their needs. For us, this means being socially and environmentally considerate, being aware of the decisions we make and investing in the future.”

Also, MHW has put their money where their mouth is by releasing products like the Lamina Eco AF Sleeping Bag. It is undyed and made from recycled materials. It looks a little funny, but its carbon footprint is smaller and it makes recreation that much more sustainable.

The Kor Preshell is a terrific, lightweight, packable, breathable niche piece that provides warmth and cuts wind at an almost-zero weight penalty. If you plan to run, bike, climb, or recreate with intensity, the Kor deserves a spot in your pack.

Patrick O’Hare is a Senior Climbing Guide at Front Range Climbing Company. He has been working in outdoor education for eight years and loves helping individuals progress in their climbing careers. You can keep up with his climbing and photography @pjophoto.