Although airbag packs have been on the market for years, for a time they were consistently too heavy, too bulky, and too expensive for many backcountry users. Luckily for us, air bags have come down significantly in weight and bulk, if not price, over the past two or three years. Between the Ortovox Avabag system, the Mammut Removable Airbag System, and the BCA Float 2.0 packs, backcountry skiers can now carry an airbag system that is actually light enough to consider hauling around as a “just in case” piece of equipment. 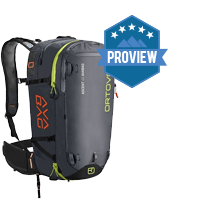 Product Description: Our new ASCENT 40 AVABAG has been designed for ski tours lasting several days and demanding skiing excursions, and it completes our AVABAG ski touring line. As with the smaller models, the focus here is upon safety – which the ASCENT 40 AVABAG achieves with ease and efficiency.

Overall, I think the Ortovox Ascent 40 Avabag is so close to being an exceptional airbag pack. Although the airbag system is excellent, the drawbacks of the other features detract from the overall quality and usability of the pack. 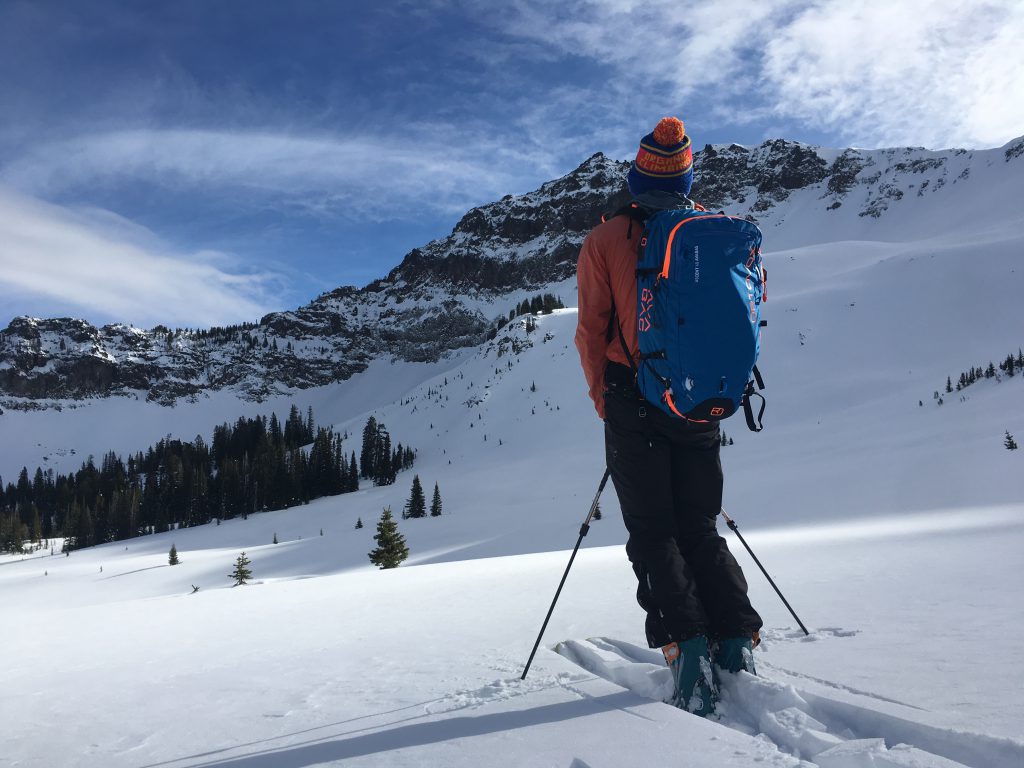 The Ortovox Avabag system comes in three carrying capacities, a 22L for short tours or going out the gate at a ski area, a 28/30L for longer tours, and a 38/40L capacity, designed for full-day tours and lightweight overnight trips. (Note, the 28L and 38L capacity packs are slightly smaller volume versions designed as women’s specific models. They retain all the same features as the 30L and 40L capacity packs)

Ortovox describes the Ascent 40 as “designed for ski tours lasting several days and demanding skiing excursions.” As a larger ski pack, I expect to be able to fit a kit for a full day if not overnight, for it to carry weight effectively and sit close to my back, and still remain streamlined enough for ease of use and easy skiing. 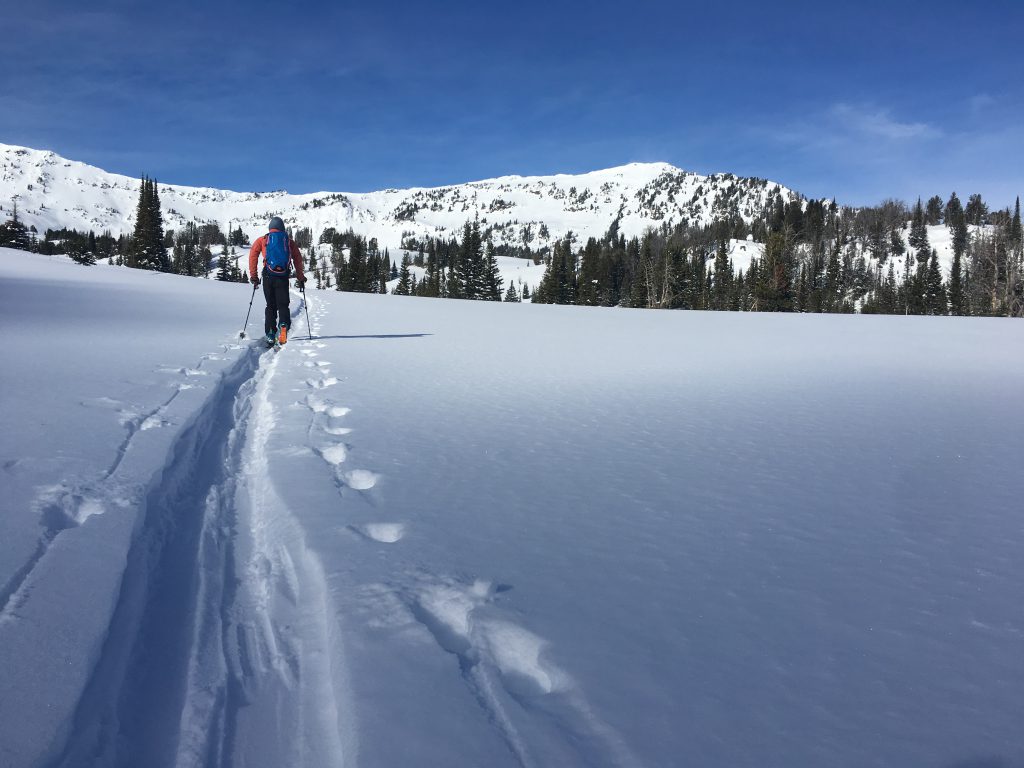 First off, I thought the suspension on the Ascent 40 was excellent for a ski pack. While relatively minimalist, I never felt the suspension lacking in carrying capacity or comfort. The pack rides exceptionally well for a larger ski pack and carried up to about 30-35 pounds easily. Although Ortovox advertises it as suitable for multi-day ski tours, I think that’s based on the European hut system and not realistic for most winter camping ski tours. I know I usually use a 50L pack for an overnight in Montana in the winter as I usually carry a -20°F sleeping bag, big puffy, stove, tent, and related accoutrements. Fitting all that in a 40L ski pack in addition to an airbag canister, avalanche safety gear, and ski touring gear is just not realistic. Maybe on a warmer spring overnight ski mountaineering mission, but for touring in the dead of winter, it’s not happening.

Overall, I found the 40L capacity on the Ascent 40 seemed relatively close to accurate (but still aspirational for multi-day tours). For sake of comparison, I was easily able to fit more equipment into the pack than in my older BCA Tech 27, but not as much as into my 45L climbing pack. I thought the layout of accessory pockets was generally logical and while I would like a small pocket on the pack specifically for a pair of goggles and a dedicated radio pocket, I generally liked the small outside pocket, upper inside pocket, and bottom zipper internal pocket for the organization and ease of access. 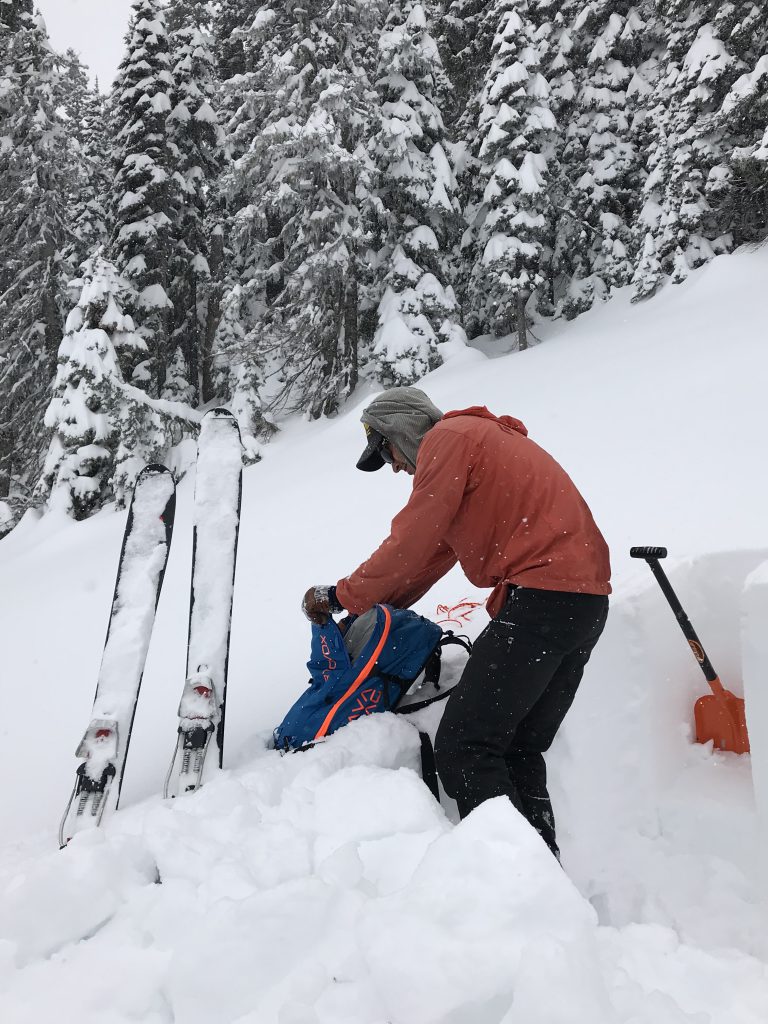 That said, the circumferential zipper design on the Ascent makes fully utilizing the available space rather challenging. Because the zipper runs around the outside and then bottom of the pack I had trouble getting the pack to open wide enough to fit things like skins or a puffy inside without unzipping the pack so far that other things started falling out. The zipper does not go far enough down the other side of the pack to allow for easy access to anything other than what’s immediately on top of the main pocket.

Additionally I found myself a bit confused by the design of the main pocket. The zipper goes nearly 270° around the top, side, and bottom of the bag, allowing the user to fold the entire main pocket open almost like a suitcase. However because the zipper is on the edge of the pack further from the back panel, to utilize the suitcase function you need to lay the back panel down on the snow. This means that any time you want to fully open the pack like it’s designed for, you get snow on the back panel which then sits against your back and gets you wet. 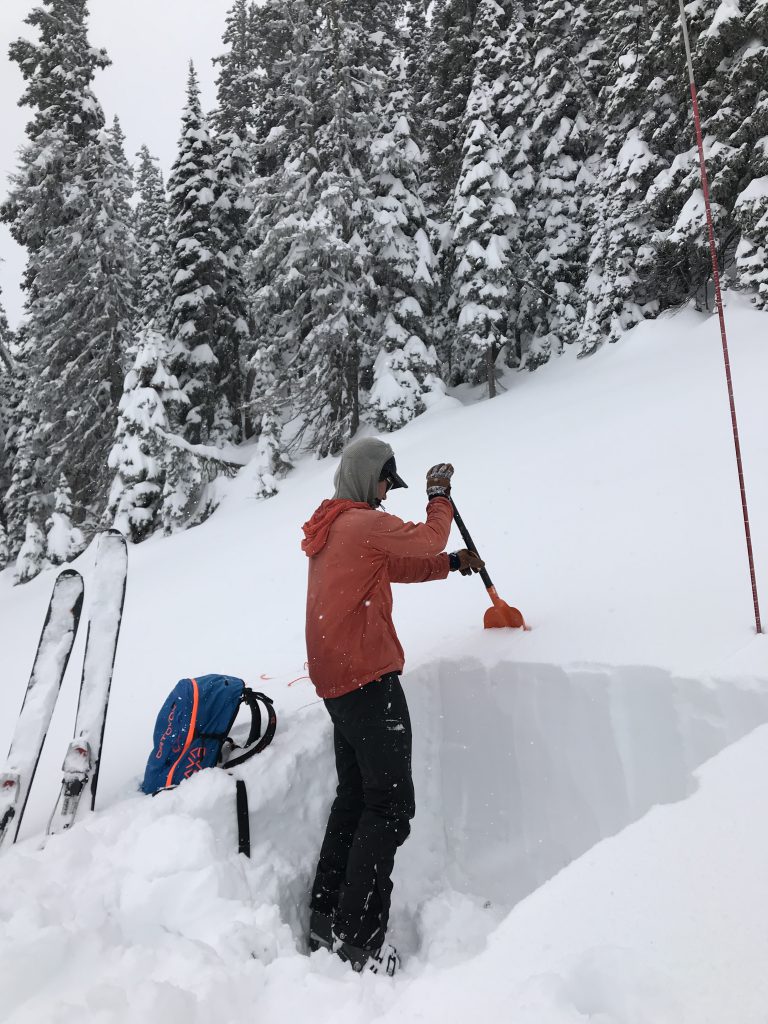 I thought the external features of the Ascent 40 were generally excellent. All straps besides the compression straps are removable or stowable, making the outside of the pack very streamlined and less likely to snag on stray branches while combat skiing, a common occurance on any tour in Montana. That said, there is still a full set of lashing straps included, a tuck-away helmet holder, ice axe loops, rope attachment, and both diagonal and A-frame ski carry options. I never felt like the pack lacked a carry option for extra equipment, something I can’t say about every ski pack I’ve ever used. One thing I do wish the Ascent 40 had was a better attachment point on the shoulder strap for a radio mic.

Of the two, I put more stock in the safety gear design as that is still my primary emergency response tool. Partner rescue should be the absolute #1 priority when facing a full or partial burial accident and in this case, I think the Ascent 40 falls short of adequate. There are two major issues with the design of the rescue pocket. 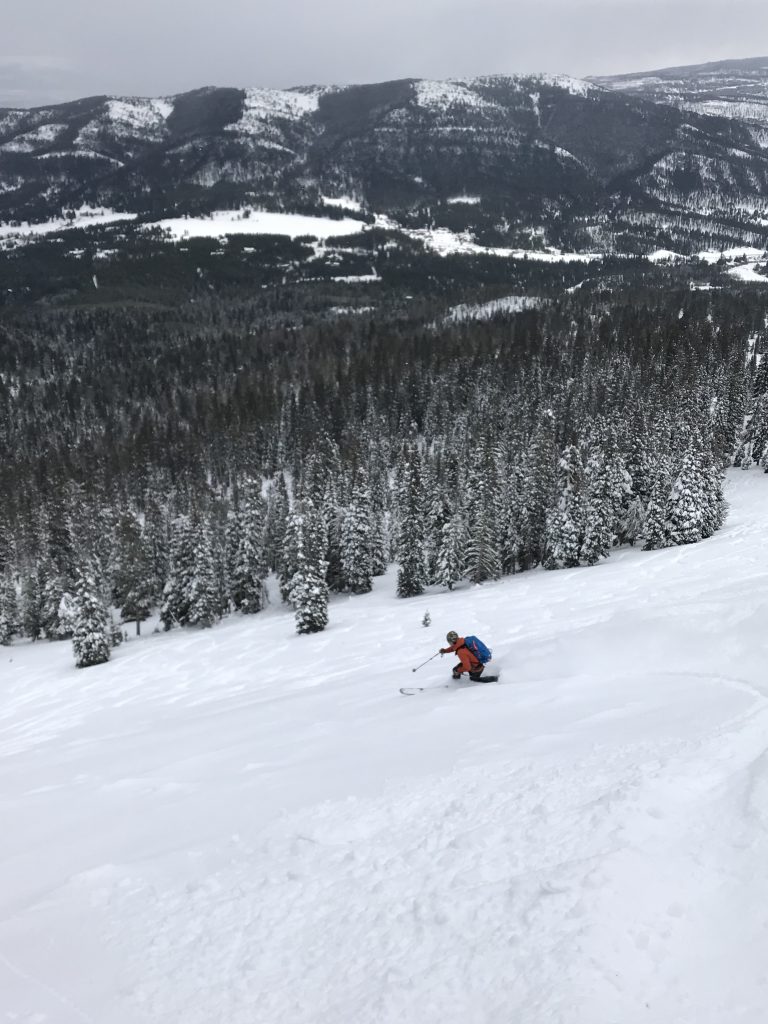 First, the zipper. On the Ascent 40 (in both black and blue versions), the main pocket zipper is a fluorescent, contrasting color. On the blue pack I tested, that’s bright day-glo orange. Meanwhile, the rescue pocket zipper is color-matched with the pack body fabric and is identified by a single red zipper pull. I think this is backwards and confusing. Even when just practicing partner rescue, I found myself instinctively reaching for the brightest, most identifiable zipper I could find on the pack…the main pocket. Now imagine adding the stress and adrenaline of a real rescue scenario and I think the decision to make the rescue pocket zipper blend in with the pack body is illogical at best. Maybe I’m being obtuse about the whole thing, but I would much prefer that either both zippers were the color of the pack body, or the avalanche gear pocket zipper was a contrasting color.

A note from Ortovox about the zipper:

ORTOVOX believes that a crucial element of safety in the backcountry is visibility.  To achieve this they made the color of the circumferential zipper a bright orange dayglow.  In flat light, both the zipper and the logo make the user easily visible to companions.  We agree with you that the avalanche rescue compartment should be easily identifiable in an emergency scenario.  With that in mind ORTOVOX chose to make the zipper pull on the avalanche rescue compartment red.  As such it stands out from the circumferential zipper.  We see your point as well but wonder if with practice you wouldn’t find these features intuitive.

Secondly, although the rescue pocket is large enough to easily hold a 300-cm probe, a full-size shovel with an extendable handle, and a snow saw, the zipper doesn’t open wide enough to easily access those items. Especially when the pack was fully loaded, I found I had to struggle to get my shovel blade out of the pocket because the zipper opening didn’t go far enough down the sides of the pack. My shovel blade kept catching on the lip of the zipper when I tried to quickly remove it.

A note from Ortovox about the volume of the avalanche rescue compartment:

All of ORTOVOX’s higher end shovels address this point by using a neck-less blade design and a flat blade.  Both features make our shovels very pack friendly, even with a fully loaded pack. The Kodiak shovel is a good example of this technology. 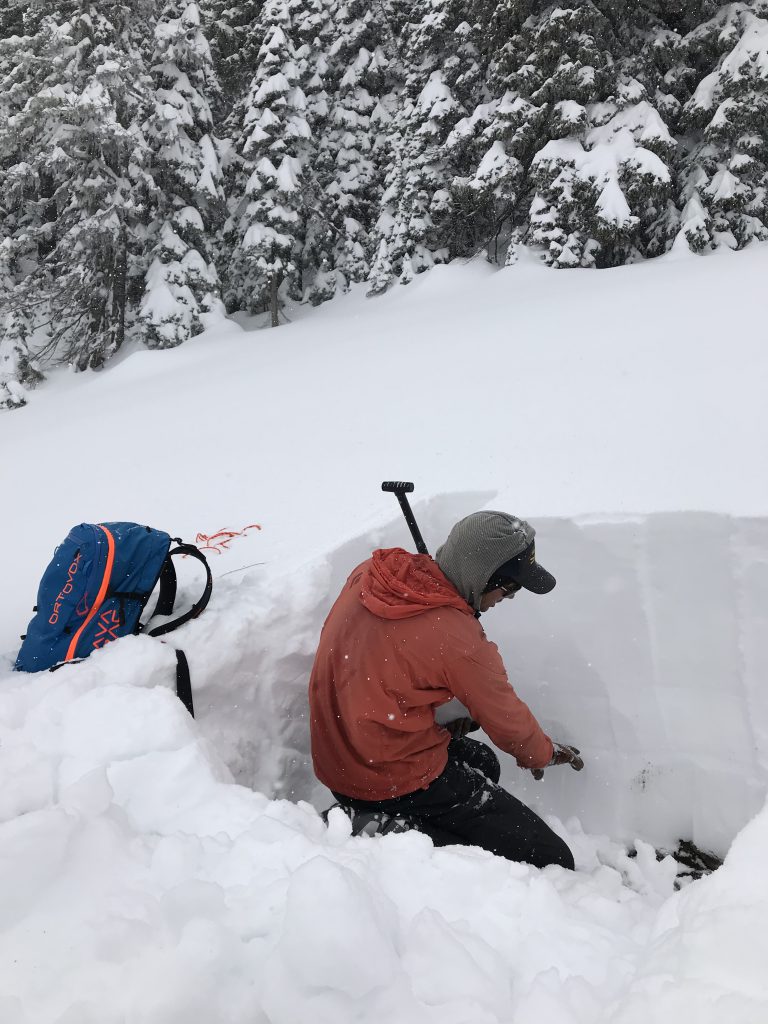 As an airbag pack, I never tested the release and function of the airbag in a real scenario, but from practice testing and relative ease of use, I really appreciated how light the system is, especially when compared to the previous generation of airbags, and how relatively easy the canister and airbag are to remove from the pack when not needed.

I also really liked the practice deployment function of the Avabag. To the best of my knowledge, the Ortovox Avabag system is the ONLY canister system on the market that allows for a practice deployment without the canister attached. Granted, battery-fan packs such as the Arc’teryx Voltair and the BD Jetforce packs allow for repeated real deployments from a single charged battery pack, but in my opinion, the fan technology is not as mature as a compressed air canister pack and comes with its own set of pros and cons.

With that said, airbags are not, should not, and likely will never be a perfect safety solution to avalanche hazards. An airbag is a specific tool that works best in certain situations and is not appropriate in all avalanche incidents. An airbag is absolutely not a substitute for proper training, terrain assessment, companion rescue, and overall good decision-making in avalanche terrain. For a more in-depth discussion of the pros, cons, and limitations of airbag packs, listen to the Slide Podcast, Season 1, Episode 3. 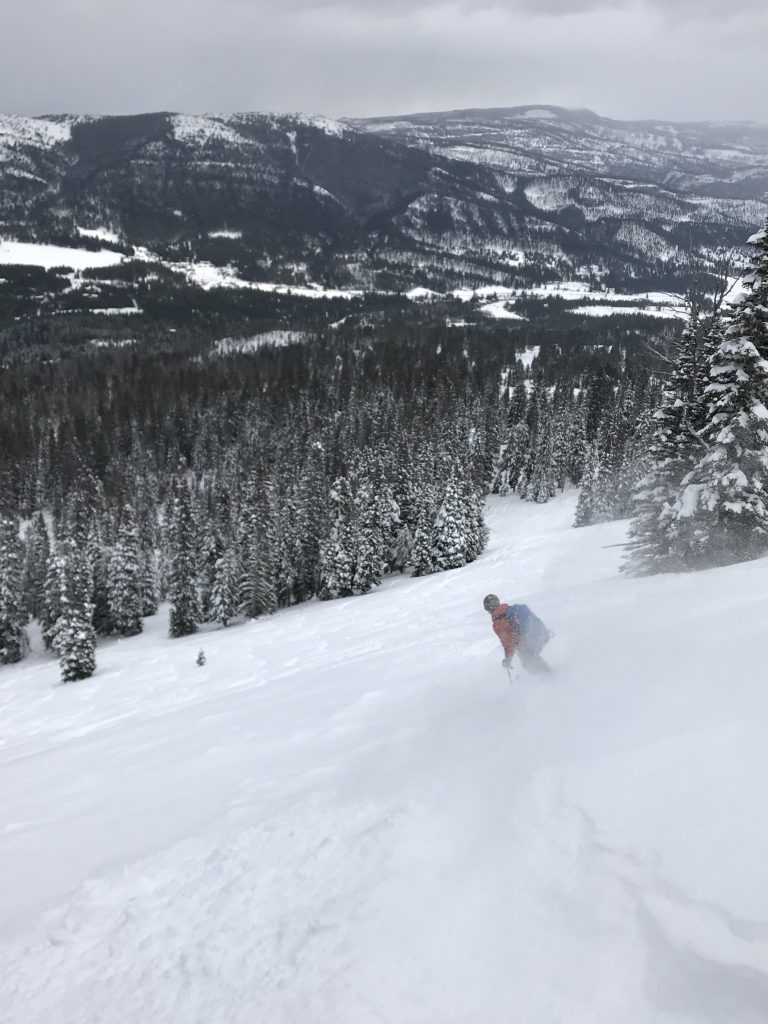 Overall, I think the Ortovox Ascent 40 Avabag is very close to being an exceptional airbag pack. The befuddling main pocket zipper, and most importantly, less than ideal safety compartment make me hesitant to recommend the Ascent 40 as a top option to someone looking for an airbag pack. Although the airbag system is excellent, the drawbacks of the other features detract from the overall quality and usability of the pack.

Matt Zia currently works as a field instructor and Expedition Wrangler (aka course supervisor) for the Montana Wilderness School, a small non-profit expeditionary school for teenagers based in Bozeman, MT. He has worn many hats over the years, including high school math teacher, ski instructor, and Outward Bound instructor. When not in the field with students, Matt can most often be found bushwhacking through the Montana mountains with skis and bear spray, wandering the Utah desert looking for splitter cracks, or improvising gourmet meals on his trusty Whisperlite camp stove.