The best-laid plans often go awry, and climbing plans are no different. I had grand plans to test out the Outdoor Research Interstellar Bivy on a trip to Mt. Katahdin in Maine, but due to permitting problems I was forced to abandon that idea. Despite my frustration as the ice season waned here in Vermont, I greatly needed to go outside and get vertical. I decided to do a quick overnight blitz in Smuggler’s Notch, which is arguably one of the best ice climbing areas in the Northeast. I’m lucky enough to have Smugg’s practically in my backyard, so I know the terrain well. My goal in the Notch was to climb as many classic routes in 36 hours as possible. I was able to get a partner for the first day (who was kind enough to shoot some photos for me but went on solo for the second day. During my time in the Notch, the Interstellar Bivy performed flawlessly. My bivy spot was a (secret) ice cave that kept me out of the wind but certainly wasn’t the warmest. I tested the Interstellar in early March, so conditions were on the warmer side (which is relative in Vermont). This means two specific things: fat ice, and cold nights. Luckily, the Interstellar wasn’t fazed by the latter.

Product Description: Built from the recommendations, feedback, and favorites of Outdoor Research employees, the Interstellar Bivy represents years of idealizing the perfect night spent outside. Seam-taped AscentShell™ technology delivers waterproof breathability, and a single pole can be used to add headspace or left at the trailhead to save weight. A newly designed side entry makes getting in and out of your shelter faster and easier than ever before, while innovative zipper design and built-in sombrero allow you to sit up and perform tasks (like cooking and packing) without stepping outside.

I enjoyed my time with the Interstellar Bivy. It kept me dry and happy in some pretty challenging conditions, and the features are above and beyond what you would normally see in a bivy. While bivies aren’t for everyone, this is a great alternative to a tent for someone who wants a light and fast to set up sleeping option. It’s versatile enough to perform in a variety of conditions and is much easier to set up than a tent. 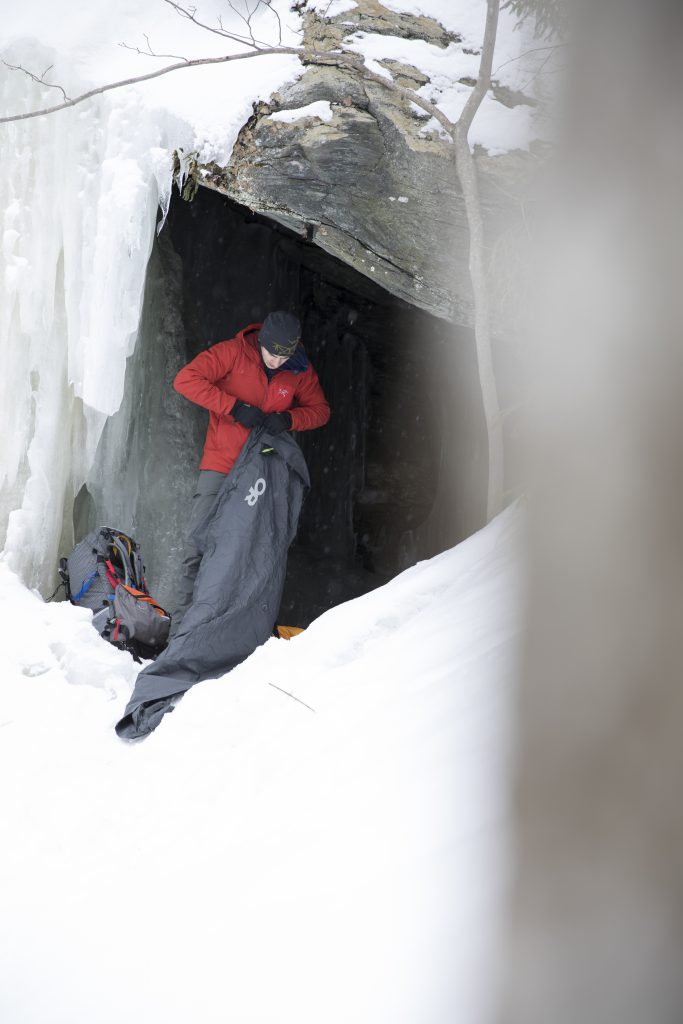 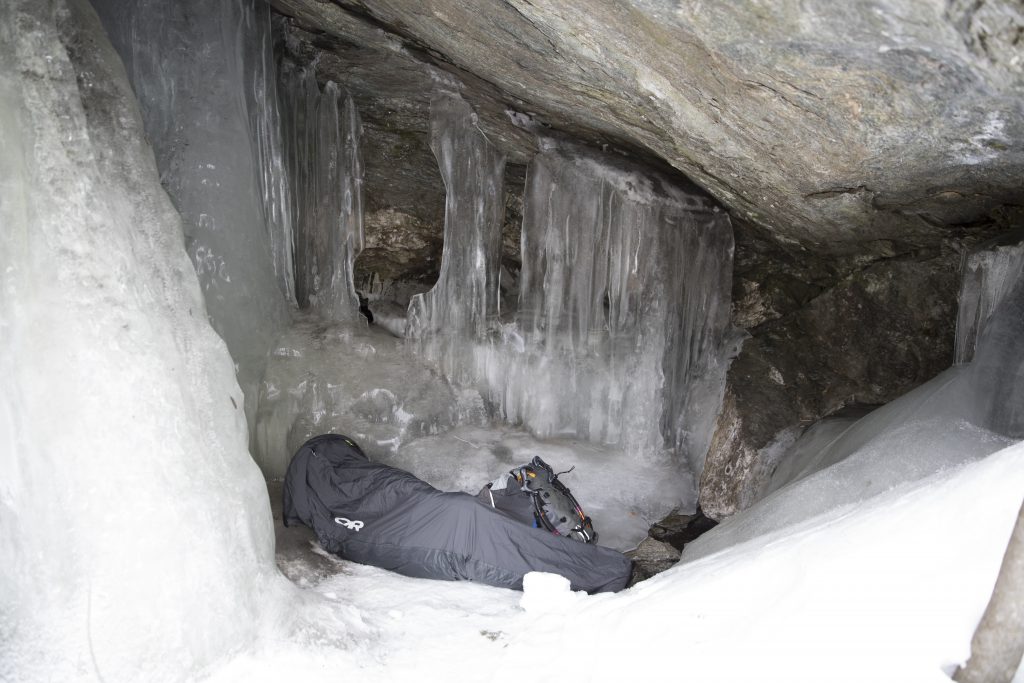 As far as bivys go, the Interstellar is pretty interesting. It has much more than just the usual features. From the outside, it looks fairly normal. However, it has several little details that make it a pleasure to use. The shape of the head space allows for extra room without adding bulk. This means that tall people can fit comfortably. It’s easy to get in and out of, thanks to a well-designed side entry. My favorite feature is the specially-designed zipper system and sombrero-like hood of the bivy. The latter two features allow you to unzip the bivy enough to slip your arms through and sit up with the top of the bivy resting on your head like a hat. You can then cook, organize gear, or play with your dog, all the while remaining dry and protected. I liked using this feature while I made my oatmeal in the morning. The interstellar has a cool two-layer system around the head region as well. The outside is the same waterproof fabric as the rest of the bivy, but there’s also an interior netting layer. You can unzip them independently, which means that mosquitoes won’t bother you while you’re cooking. An additional benefit is that you can leave it unzipped and look at the stars while you fall asleep. I’m looking forward to using this feature more in the warmer months! 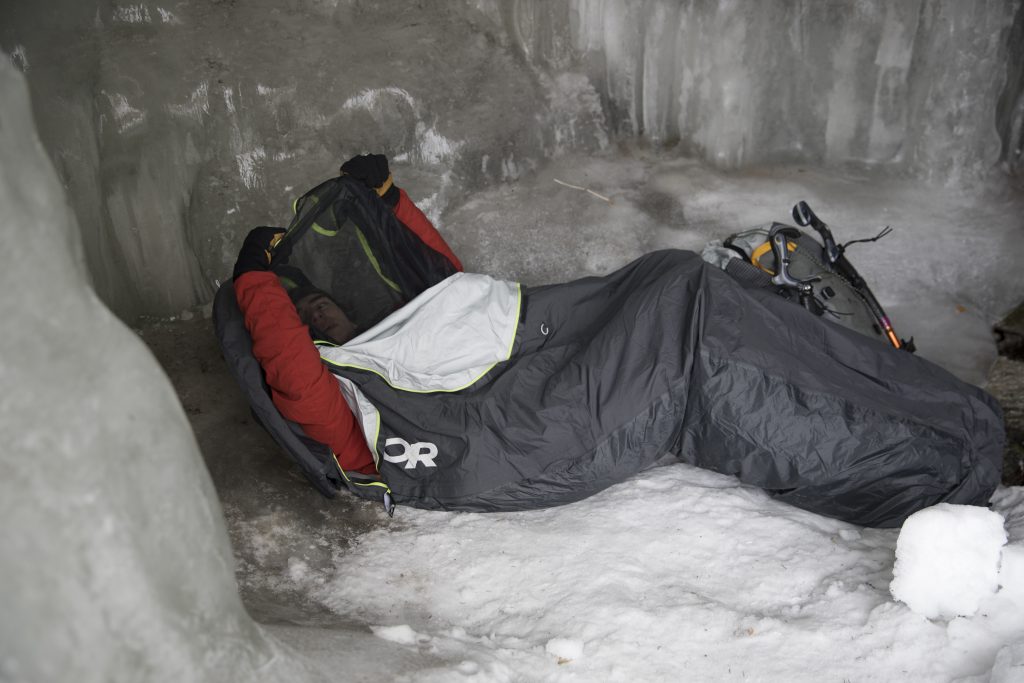 I’m dead-on 5’10”, and the Interstellar fit me perfectly. I have a little bit of extra leg room, but not so much that there’s a bunch of cold dead space. I brought a fairly light and thin sleeping bag, as well as a four-season ultralight insulated sleeping pad. I was worried that this combination would be too light, but it ended up being just right. I definitely could’ve gone with warmer gear, but the Interstellar did a good job of working with my sleeping bag to keep me insulated. I was concerned that there might be something of a “trash bag effect” while sleeping, but I didn’t have a problem. The bivy can be used with stakes in order to give it a little more shape, but I just used the single included frame pole to add structure around the “hood.” I never felt the need to use stakes, which might have been due in part to the fact that I didn’t have to deal with much wind. Overall, the bivy packs down to a very manageable 40-ounce water bottle size, and I barely noticed the weight. In the future, I would honestly strip it down even further, and just run the sack on its own depending on the situation (like bikepacking). 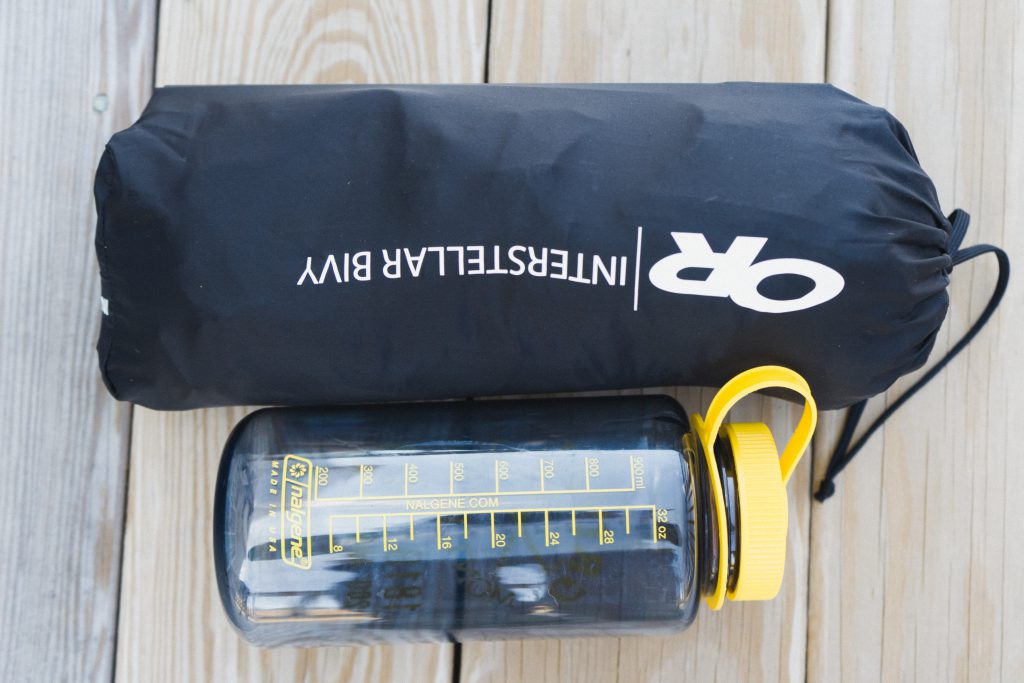 The Interstellar Bivy comes in at just under 20 ounces, which is a little lighter than most one-person tents. The perks of using a bivy like this instead of a tent are that it’s very compact, super easy to set up, and you can sleep virtually anywhere. The lightness comes from the 20d and 40d shell fabrics, which you’ll recognize if you’ve ever tried out the OR Interstellar jacket. I had no issues with the sack wetting out, despite some fairly damp conditions. This was my main concern, but the fabric proved to be extremely waterproof. I didn’t go out of my way to thrash the Interstellar on rocks, or any other rough surface, but I have no concerns about durability. It’s a very stout fabric, and  I think it’s going to hold up well over the long term. 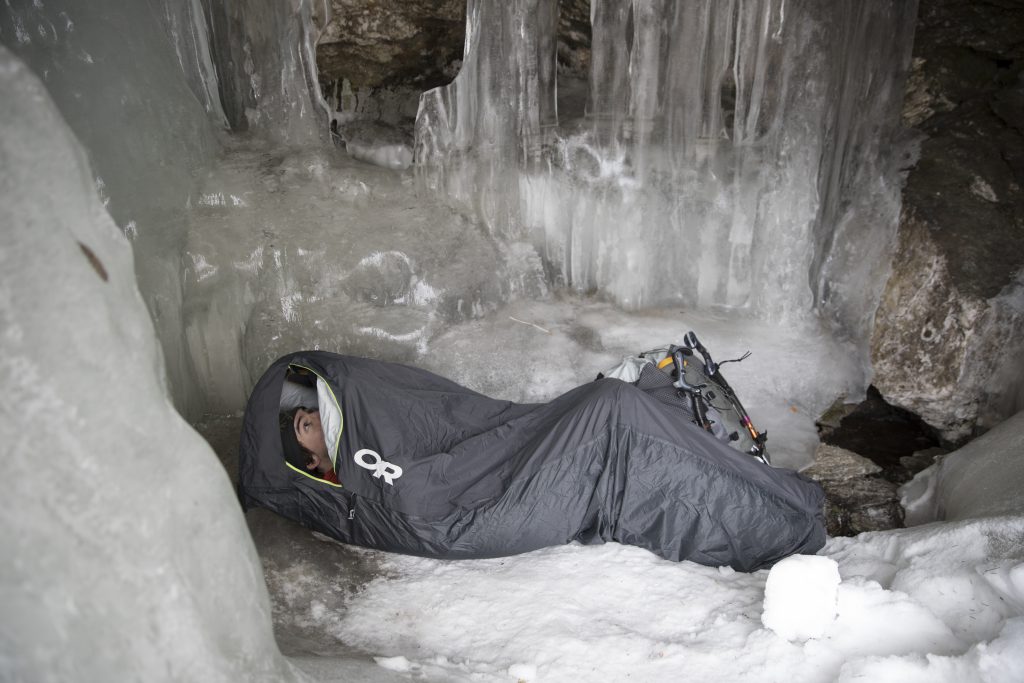 Because of its durable fabrics, lightweight, and clever features, the Interstellar Bivy could make a great four season piece of gear. It’s light, but durable. Minimalistic, but fully featured. Attractive, yet functional. These are all the key points that you want in a piece of gear, and the Interstellar definitely delivers. Bivy sacks aren’t for everyone since they’re a bit more minimal than a tent. However, for fast and light trips I’d take this over a single person tent. I’m planning a bikepacking trip this summer, and the Interstellar is going to be a key component of my sleep system. I’ve really enjoyed my time with this piece of gear, and I’m excited to see how it continues to perform!

Eli grew up in Vermont and has always had an innate appreciation for the mountains. Everything changed, however, when he discovered climbing. Since then, he’s devoted all of his time to the development of those skills and now works for Petra Cliffs Mountaineering School. He loves sharing his knowledge and love of climbing with people of all ages. Most of his time is spent climbing in Vermont, but on the rare occasions that he’s not climbing, he’s bikepacking, trail running, and skijoring with his husky, Koda. 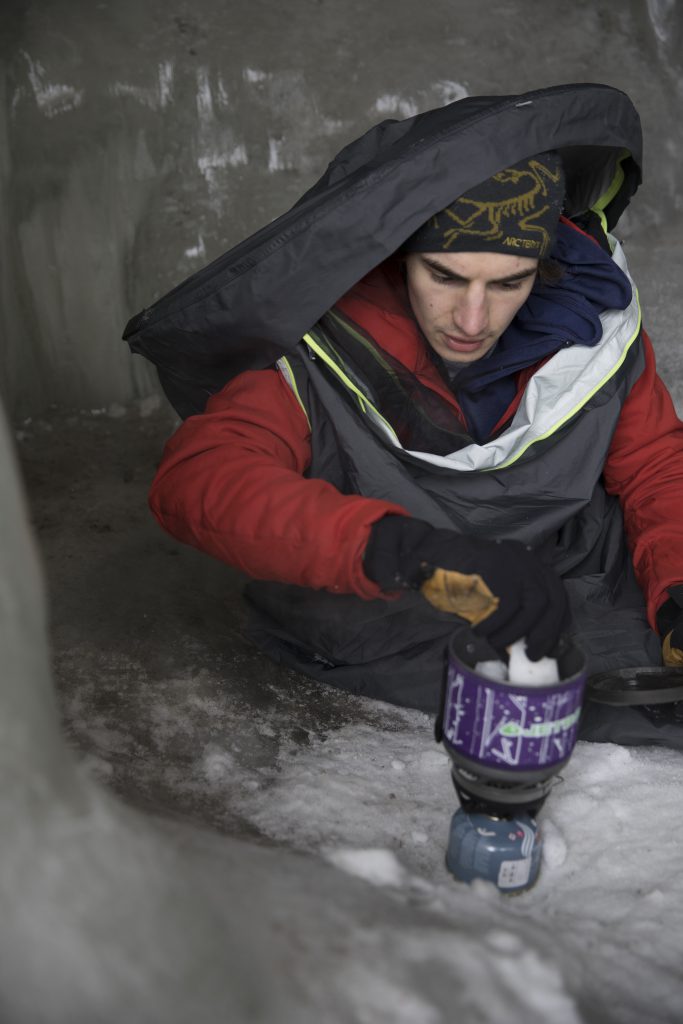